Skip to content
2016 Cadillac CTS-V: Superhero in a business suit 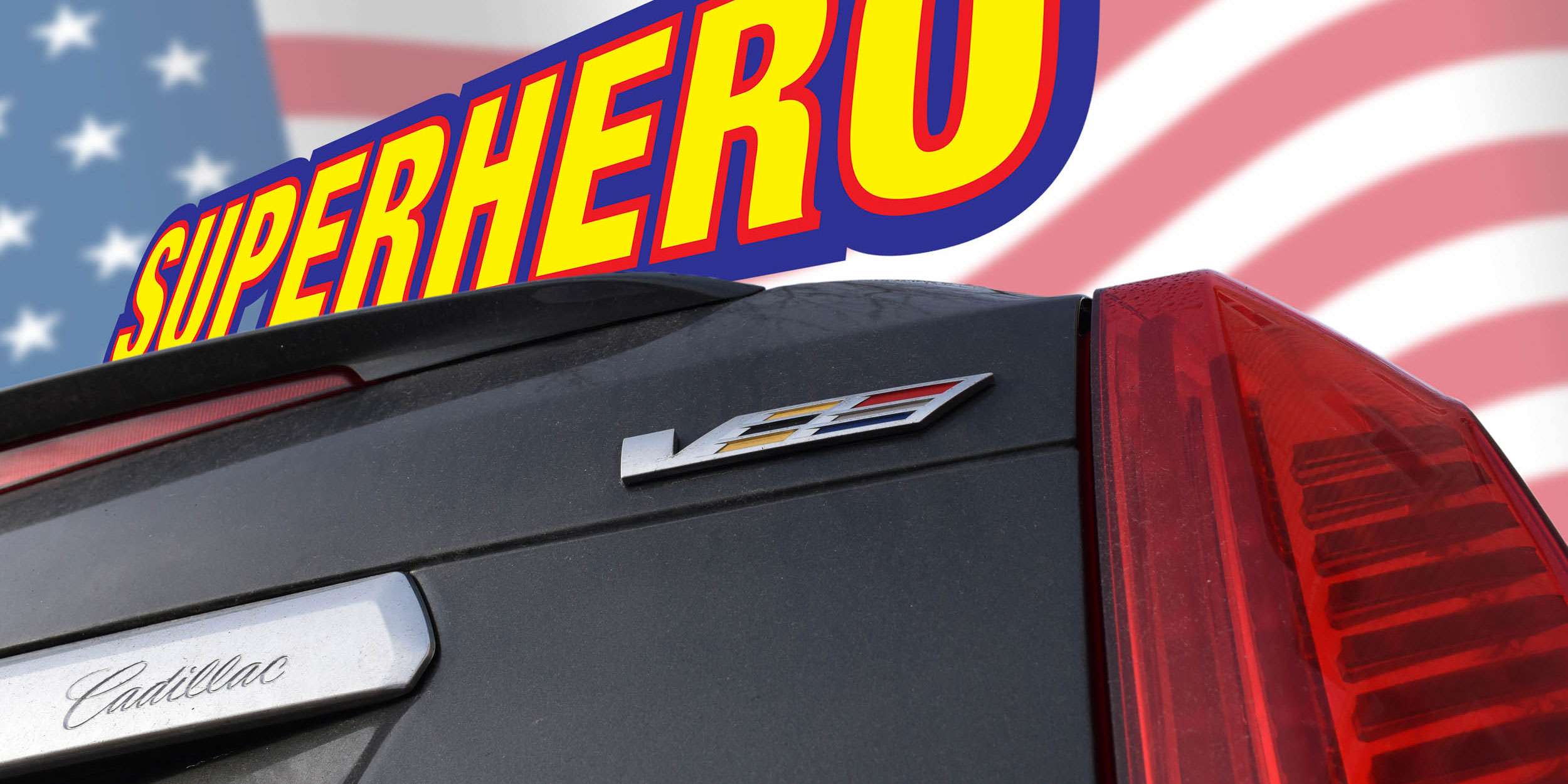 My mind can’t seem to wrap around the surreal experience my body is experiencing.

I’m hurtling through time and space at near-death speeds surrounded by leather, comfort and luxury. I’m at our home track, Road America in Elkhart Lake, belted into the passenger seat of Cadillac’s latest (and greatest) CTS-V.

One of GM’s test drivers is at the wheel, and he’s been giving hot laps all day long, which means if he wasn’t familiar with the track before, he is now.

But none of the blurring scenery and tire howling makes any sense.

The CTS-V is a 4,100-pound behemoth, yet it is clinging to the track like a claw-filled house cat holding on to a brand-new catnip-filled fuzzy toy. There is no slop from the chassis, no sliding uncontrollably, no unnerving sensations as we put down lap times equal to that of the world’s fastest sportscars from just a few years ago.

My escort has the built-in Performance Data Recorder (PDR) running, so I’ll be able to watch the lap back on video with speeds and g-forces on the screen for good measure. It’s as if the engineers at GM figured out how to suspend the laws of physics when you hit the start button in this monster family sedan.

The recipe hasn’t changed all that much since the first V-Series CTS back in 2004. Throw a small-block V-8 from the Corvette into the engine bay, beef up the suspension and wish new owners luck.

What has changed is the ability of the car to cope with the added power and performance add-ons along with more refinement inside the cabin.

When the CTS-V first came out it looked far more aggressive than the standard car on which it was based. The second-gen CTS-V looked even more aggressive and was offered in sedan, coupe and wagon form. That wagon remains one of the best sleeper cars ever built.

This current-car is, once again, only available in sedan form, but it has lost some of its aggressive edge — at least in appearance.

That’s not to say it’s not a good-looking car; the CTS-V is bordering elegant in its execution. The hard edges and creases of Cadillac’s “art and science” design language have been replaced by softer lines and a more upscale look enhanced by some bright work on the grille and window surrounds and the wheels.

The headlights, running lights and taillights are more noticeable with these newer lines, and they highlight the edges of the design.

The interior is clean. When the car is running and Cadillac’s CUE system (Cadillac User Experience, the company’s touchscreen/interface on the center console) is lit up, the cabin is attractive and welcoming.

When the car is turned off and the screens are off, it is like a black hole waiting to swallow you up. The interior is available with seats in a light gray (Cadillac calls it “Light Platinum”) or in black with a tan sueded insert (called “Saffron”) instead of the standard all-black hole.

I highly recommend getting something other than all black unless you like the Batman treatment.

The standard seats are 20-way-powered contraptions, and I can’t speak to their comfort as our car was blessed with the optional Recaro sports seats, which do firmly hold your hind parts in place.

BACK AT THE TRACK

Back at Road America, only a couple of minutes separate our launch from pit lane to our return. The CTS-V performs flawlessly, and as previously mentioned, the car has been doing this all day long with only an occasional stop for fuel.

Think about that for a minute.

A 4,000-plus-pound family sedan doing hot laps at a 4-plus mile road course from 9 a.m. until 4 p.m. with no brake fade, no overheating, no change of tires, just fuel. And don’t for one minute think because we were doing hot laps that the air conditioner wasn’t running. The cabin was a serene place to be while taking in the blurred view around the track.

So, the CTS-V can do track duty, but how does it handle the real world?

Cadillac claims the CTS-V is two cars rolled into one: sports car and comfy sedan.

Is it? We find out in the best and worst of ways.

Cadillac’s CUE system works far better than it had in its debut many moons ago. It incorporates climate control, audio system, navigation and your smart devices in one large center screen. It’s functional, but even with its haptic feedback, I would still much prefer some good old-fashioned knobs and switches.

CUE also uses a proximity sensor to detect when you are reaching for it to prepare for your touch. The trouble with systems like these, and I don’t know why car companies can’t seem to pick up on this, is it still takes your attention away from the all-important focus of driving.

I mean, come on, here is a huge sedan with 640 horsepower and 630 pound-feet of torque from a 6.2-liter supercharged V-8 being dumped into the rear wheels through an eight-speed gearbox and you want me to look away from the road?

I head out onto an interstate and start cruising.

The suspension that was so direct and adamant on the track is now comfortable and absorbing, such is the glory of Magnetic Ride Control. However, the steering is a little “off” to me. It is an electronic power-assist rack from ZF and is supposed to adjust to driving styles and the demands put on the chassis.

I will admit to never having been a fan of adjustable steering systems and typically find them lacking in control or feedback. This one feels better to me than some others, but there is still a disconnect at the helm.

The CTS-V provides several different options for driver adjustability. Drivers can select Touring, Sport, Track and Snow/Ice. In Race Mode, there are an additional five levels of Performance Traction Management (PTM), which gradually take away intrusion from the safety net of traction control and electronic stability control.

I leave the car in Sport — for the moment.

Traffic slips away on the highway, and I decide to drop the hammer. I swear, with all the windows shut, my hair still went flying back as if the car was a droptop. The head-up display flashes numbers in front of my eyes, but they roll so fast that they are hard to discern. The supercharger whine is not intrusive, but fun to listen to. The exhaust note is a little subdued for my taste, but it certainly lets others know this is no ordinary CTS.

The Caddy does daily duties quite well. There is ample room throughout the cabin, both front and rear, and the trunk is spacious allowing for more than a dozen paper grocery bags.

Fuel mileage is the only real detriment to using this car as an everyday appliance.

We had a family event to attend out of town, and I thought this would be the perfect opportunity to see how the CTS-V would handle family duties. We load up on a Friday and head out on the road. The drive is sublime with the Bose Surround Sound stereo pumping tunes that appease all four of us, and we arrived at our destination in record time. Unloading was a cinch and we parked the car overnight.

Then, the storm hit. Not a rainstorm, but a winter storm of epic proportions.

We’re talking 8 to 12 inches of snow in less than 8 hours. This made me a little nervous, and it was with a little trepidation that I walked out to the car mid-morning on the next day. The resort staff was busy with their four wheelers and snow blowers trying to unbury the parking lot, and the CTS-V — parked away from the crowds, of course — was a bit challenging to get to.

With a little help, we were able to clear a path for the CTS-V to make its exit, and I put the car in Snow Mode. After loading back up, we set out on a non-record-breaking drive back home.

During portions of the drive, I put on the PDR to document the fact we were driving a rear-wheel-drive, high-horsepower sport sedan through snow-and-ice-covered roads.

This was almost as surreal as the experience at Road America, and yet the big Caddy does not misstep even once. Had the car been wearing sport tires as opposed to the all-seasons, we might have had some issues. But the CTS-V was, yet again, amazingly surprising in its ability to simply deliver on that which it was asked.

Once my family was safely back at home, I had to go out for one more drive.

Fresh snow and only one person inside the car, combined with the promise of all 640 of those horses under the hood was just too good to pass up.

Putting the V back into Sport Mode (with full traction control and ESC active), I explored some limits in a vacant, and rather large, parking lot. The CTS-V delivered, yet again.

It was a hoot to swing around that much mass on a low friction surface. I didn’t stop smiling for days.

That smile wasn’t just the result of some snow play, but the fact GM has finally produced a sport sedan that is not only competitive with the best machines Europe has to offer but also can best them.

The CTS-V has commonly been referred to as a “four-door Corvette,” but I disagree for once simple fact: It’s better than that.

If you liked this story, be sure to check out our review of the 2020 Dodge Charger Widebody – another wolf in sheep’s clothing. 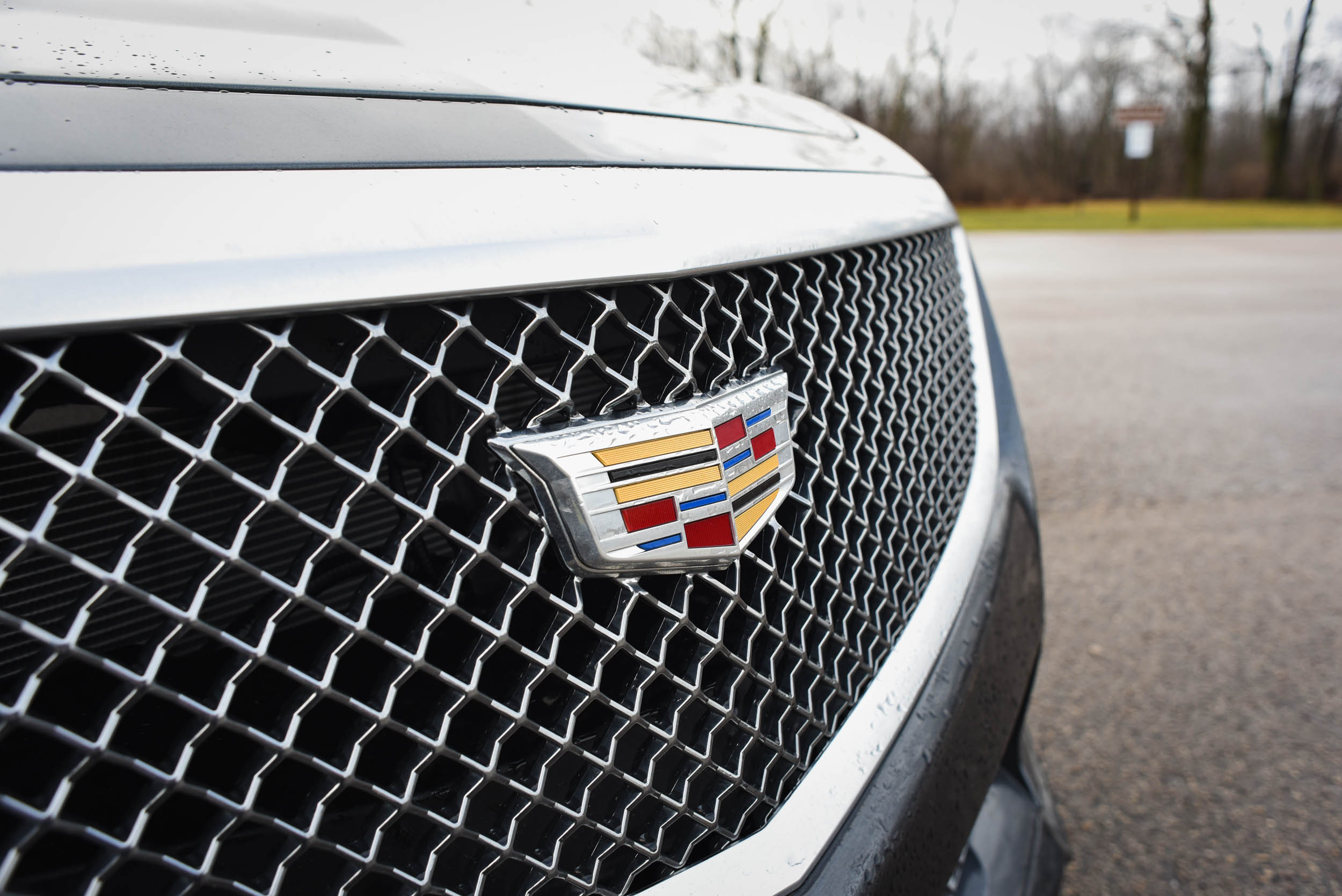 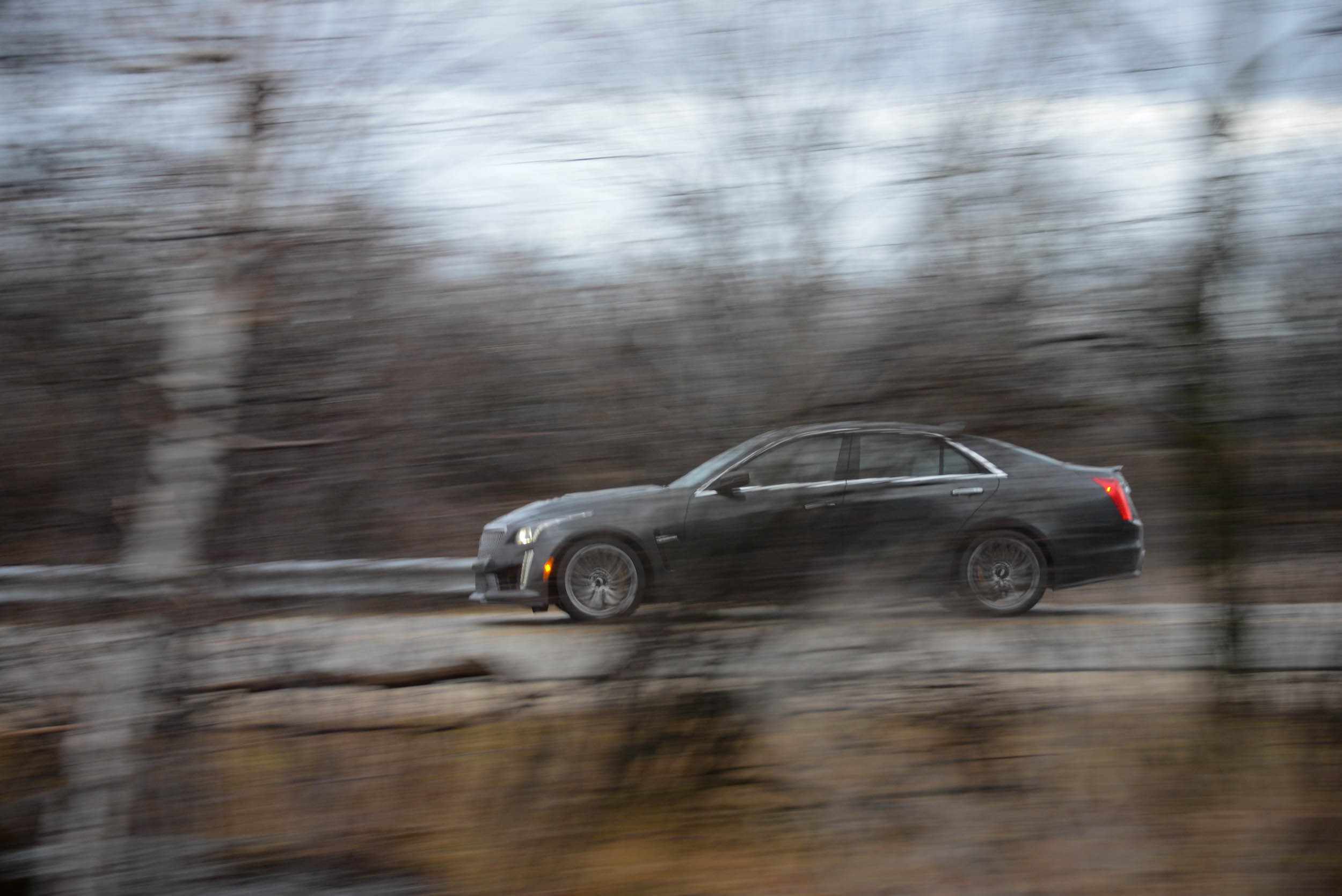 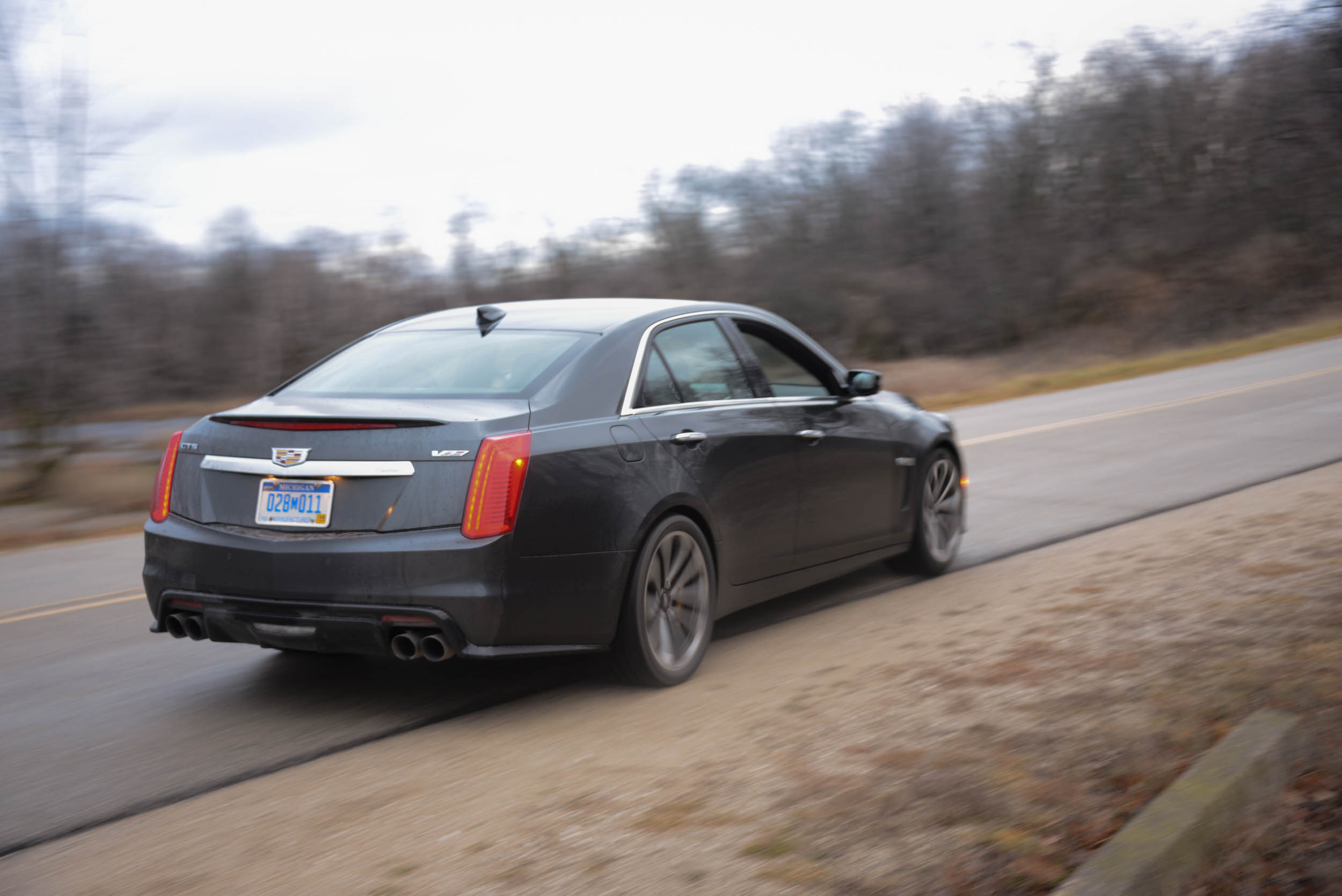 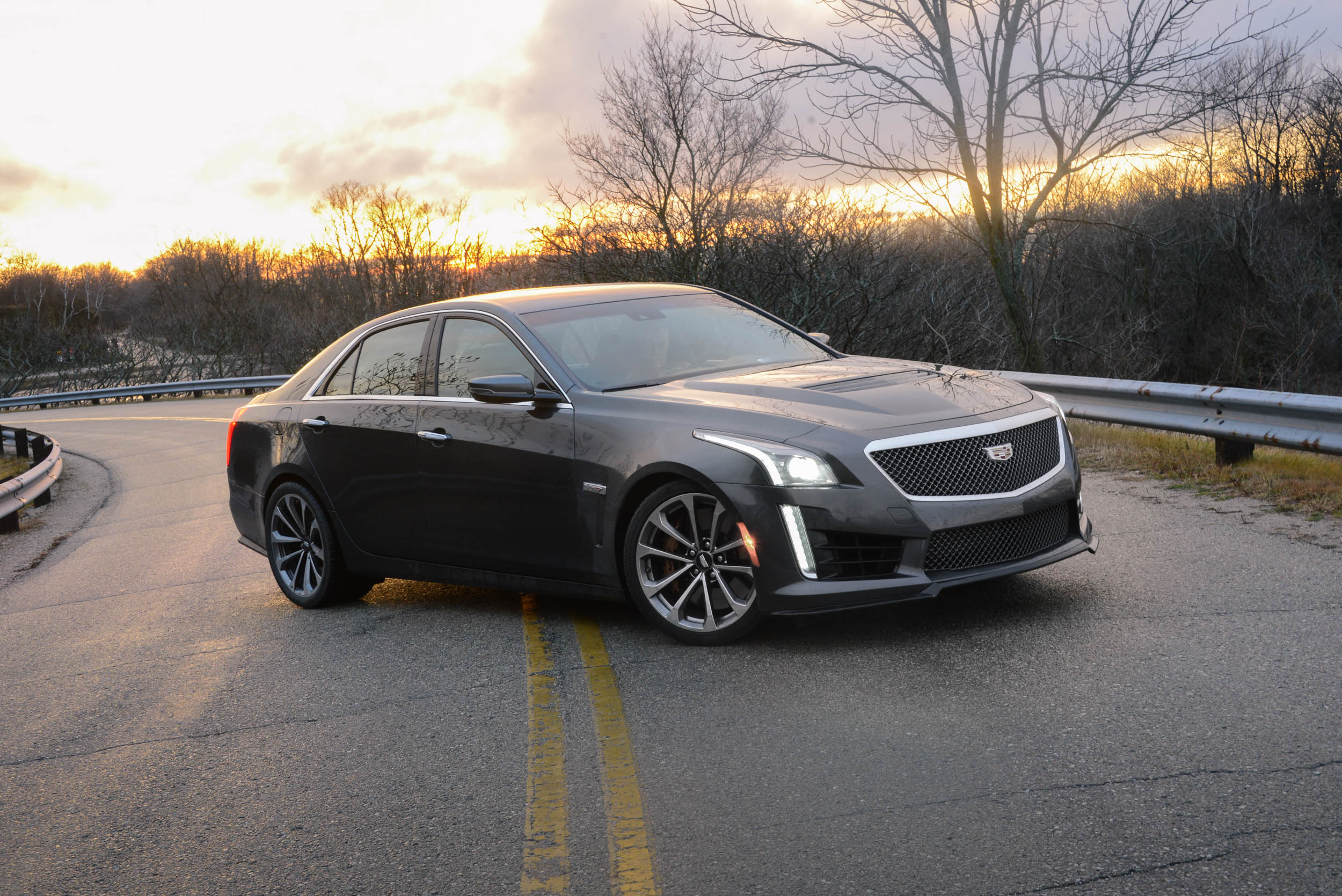 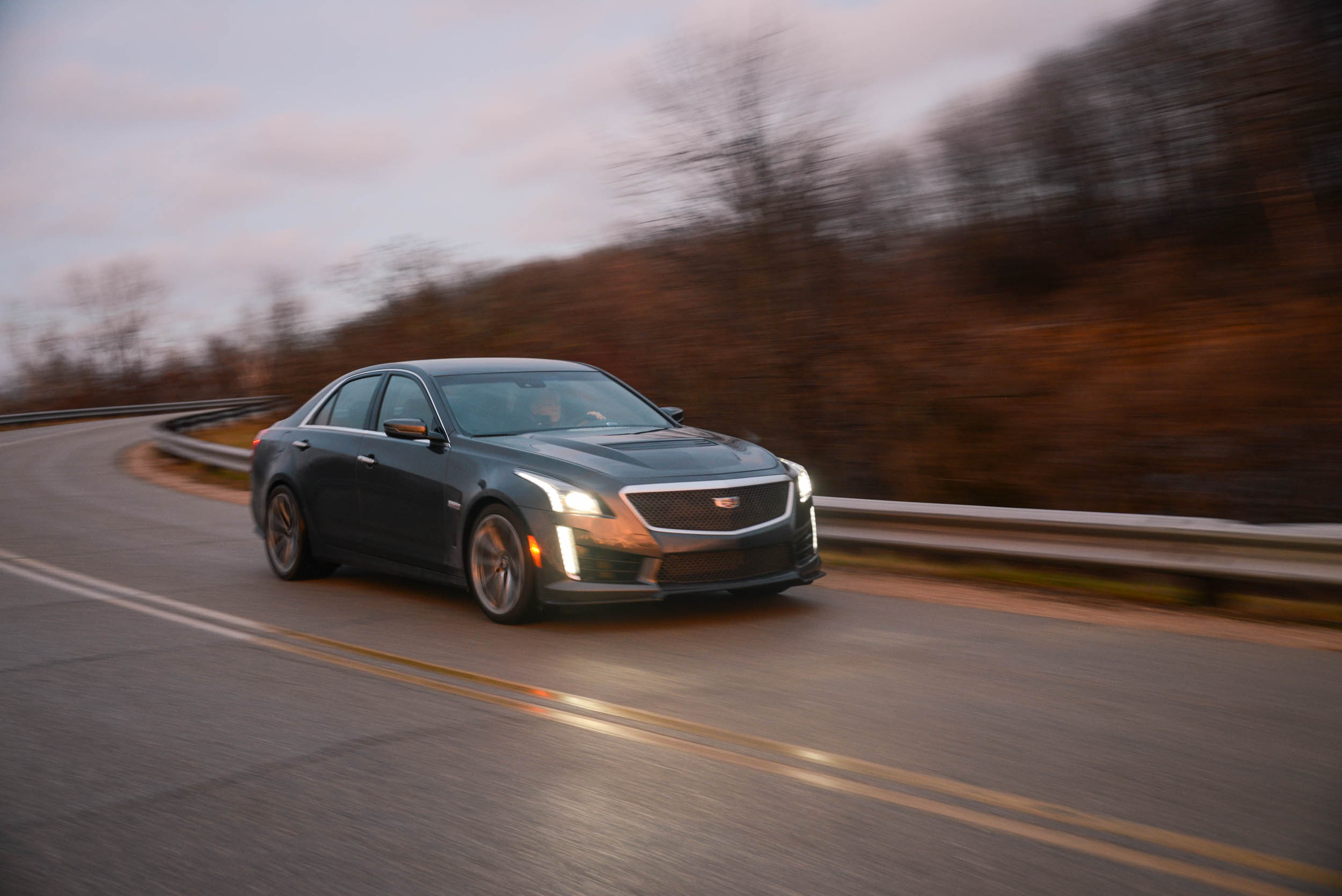 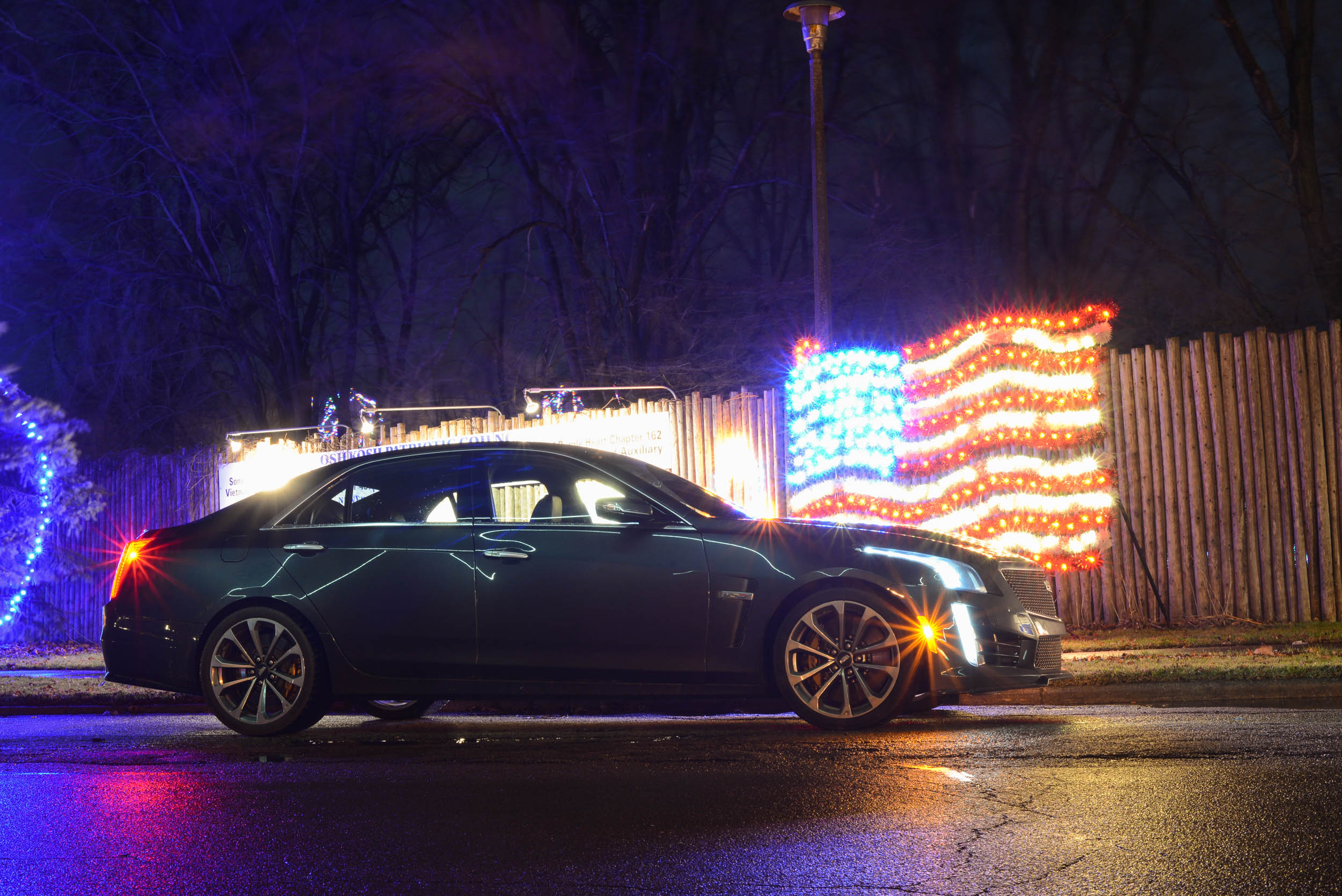 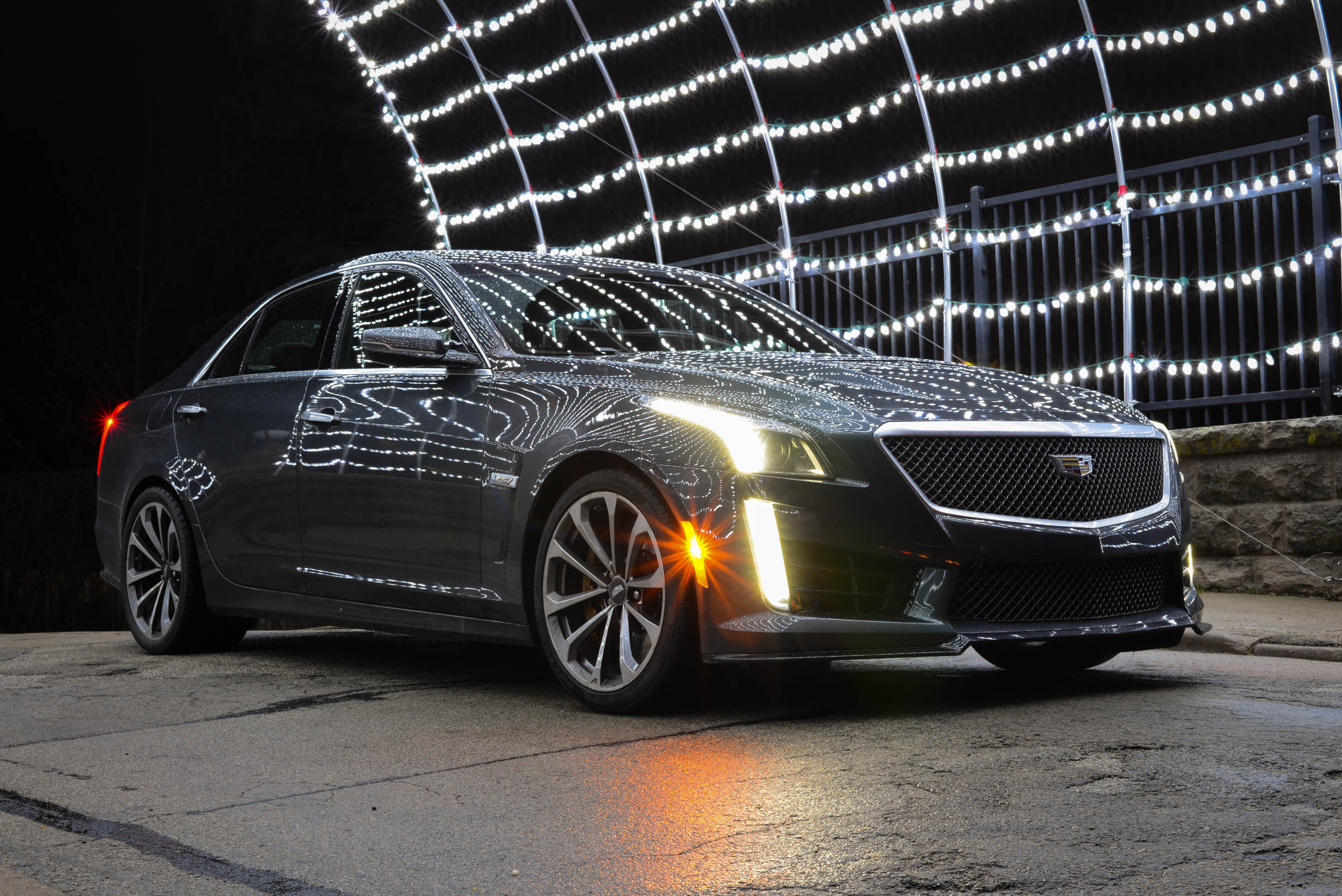 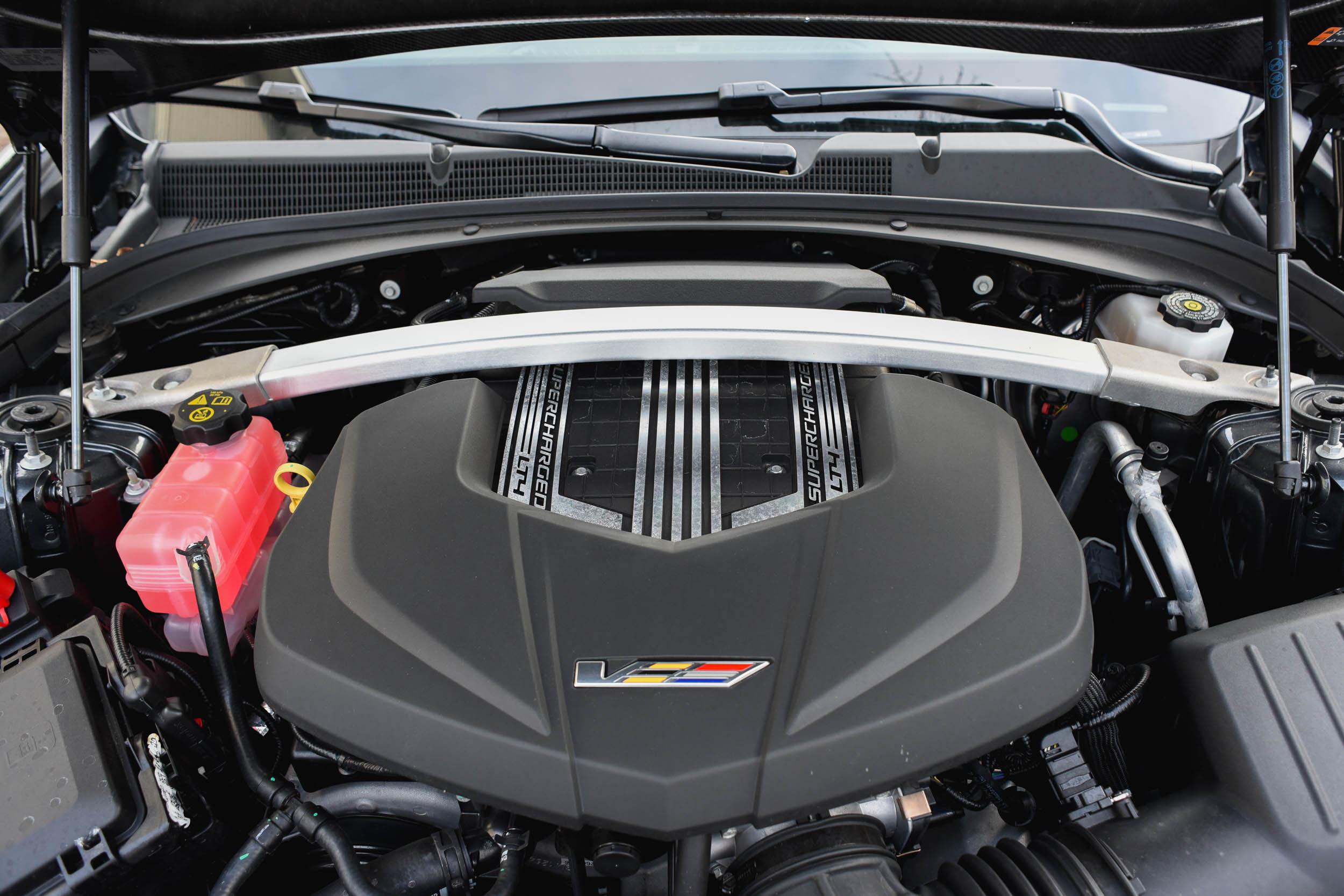 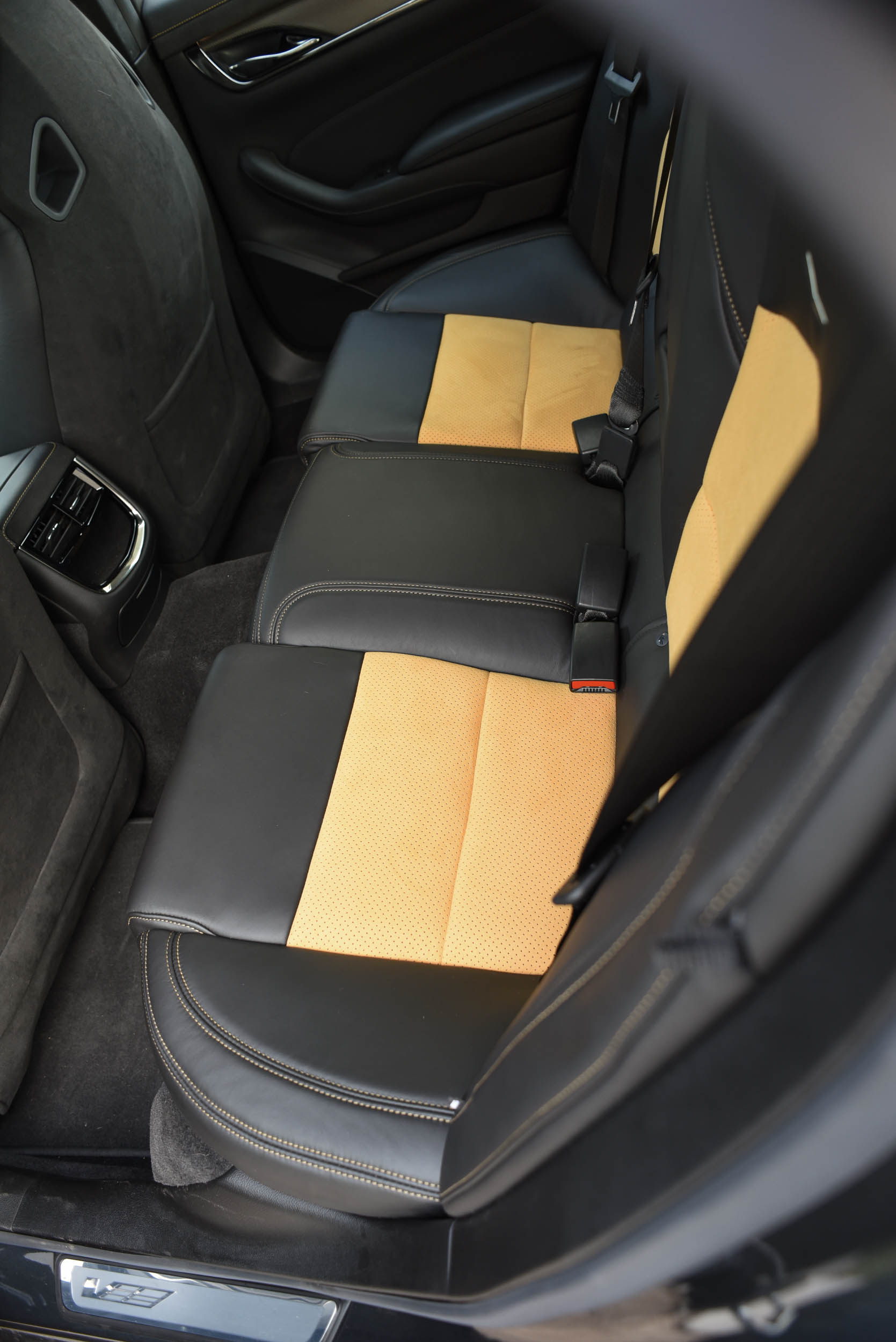