The Hyundai Elantra is a brand new vehicle for 2021. The seventh generation of the Elantra is longer, lower and wider than its predecessor making it one of the most spacious sedans in its class.

The new design is based on a philosophy that Hyundai calls “Parametric Dynamics.” The design is meant to emulate geometric crystals. I interpret that to be something like how a diamond in a ring will reflect light across its varying facets.

The side profile of the new Elantra has several lines that intersect and zigzag across the door creating a sort of backward “Z” effect.

The top of the trunk carries over beyond the space below mimicking a flat ducktail. The front end features a prominent grille that flows elegantly into the headlights.

It’s definitely an interesting design and more eye-catching than many of the Elantra’s rivals. But beauty is in the eye of the beholder so I will leave that judgment call up to you.

These gem-inspired design elements make their way to the interior as well. Everything from the wiper and turn signal stalks to the mesh-like pattern on the upper dash has little facets to it.

The cabin is far roomier than the Elantra’s outward appearance would suggest. There is plenty of room in both the front and back seats for people over six-feet tall though rear headroom will impede anyone over six-feet.

The instrument panel is all driver-centric. There is a very nice looking swath of glass that houses a 10.25-inch display and an 8-inch display that wrap around the driver. The first of those screens sits right in front of the driver. It presents a traditional looking tachometer and speedometer with an information screen housed between them.

The second screen is on top of the center dash and is meant for all of your infotainment. It is 8-inches in standard form, but a 10.25-inch screen is optional. More on this screen in a bit.

Below that screen are two knobs and a row of buttons for the HVAC. Thank you for keeping this simple and intuitive Hyundai!

The screen in front of the driver works well and has a little fanfare tossed in for fun. Like when switching driving modes.

When you press the button to switch driving modes, the screen does a colorful little dance of swirls while changing the highlight color to red for Sport or blue for Normal and Smart.

The IVT is Hyundai’s variation of a Continuously Variable Transmission. It is also one of my least favorite features of the car.

While the IVT helped to achieve a weeklong fuel economy of better than 35 miles-per-gallon, it was also lethargic in its response to throttle inputs. The rubber band nature of CVTs is ever-present in the Elantra and it fails to deliver what the engine promises.

Other tech around the cabin is more interesting. Take, for example, wireless Apple CarPlay or Android Auto. Yes, you read that right, WIRELESS.

This feature only works with cars not equipped with navigation so you will have to bypass the 10.25-inch infotainment screen if you want wireless connectivity. But don’t worry because the 8-inch screen works just fine.

On top of wireless connectivity is cooled wireless charging. Have you ever used your phone for navigation and music while on a long trip? If so, then you know how toasty those little smart devices can get. Why not have your wireless charging pad breathe a little to keep your phone cool? It’s a great idea and well executed.

If you do step up to the Limited model, you will be able to play DJ with 64 different color settings. Lights are integrated into the vents and you can change their color to your heart’s content.

There are a few different options under the hood of the new Elantra.

For the first time in the marques history, a hybrid is available. In hybrid form, the Elantra gets a 1.6-liter Atkinson cycle four-cylinder paired with a 32 kW permanent-magnet electric motor with a combined output of only 139 horsepower but a stout 195 lb-ft of torque.

I am certain that the hybrid Elantra will scoot off the line quicker and with more assertiveness than our non-hybrid variant. Especially considering that the hybrid powertrain is connected to a 6-speed dual clutch transmission. I look forward to the opportunity to get behind the wheel of the hybrid to see how that system bears out.

Our Elantra SEL was powered by the standard 2.0-liter four-cylinder with 147 horsepower and 132 lb-ft of torque. It’s a peaky little engine that, as mentioned earlier, has its performance stifled by the IVT.

The other engine option is a 1.6-liter turbocharged four-cylinder good for 201 horsepower and 195 lb-ft of torque. That power plant resides solely under the hood of the Elantra N.

SAFETY UP THE WAZOO

One area where the Elantra doesn’t skimp at all is safety.

The Elantra promises more than just daring design. Heading down the road I am immediately impressed with the composure of the chassis. The ride is not firm but also not too softly sprung.

There are struts up front and a torsion beam in the back but the ride control is solid.

The steering is light but communicative even if the steering wheel itself is a little odd in appearance and feel.

There is more road noise than I hoped for but the audio system is good enough to drown it out.

Changing from Normal to Sport in the drive mode selector generates noticeable difference in the heft of the steering. The funny thing is, when you switch to Sport mode the transmission “downshifts” holding revs a little higher for faster throttle response. Here’s a hint…it doesn’t work. The throttle is still barred from making the engine work properly by that transmission. In spite of the angst provided by the transmission, for the most part I was still enjoying my time in the Elantra.

I drove through a parking lot that looked like it had been recently bombed. Cracks and potholes were everywhere and the chassis did NOT like it. Up to that point all of my driving had been on fairly smooth highways and city roads. No badly broken pavement.

The Elantra does not like broken pavement. Not one bit.

It bucked and kicked like a wild horse that refused to be broken. That one parking lot really provided a tremendous amount of insight into the ride of the Elantra. There is work to be done on this suspension.

The new Hyundai Elantra presents quite an interesting prospect. The value proposition is fantastic and it really is a solid car.

The suspension shook me a bit, pun intended, but unless you’re driving through war-torn city streets it will probably suffice for most buyers.

The Hyundai Elantra recently won the North American Car of the Year award and it’s easy to see why. It is packed with safety technology that cars twice the starting price may not have, it is economical and comfortable with room for a family. Like all Hyundai products, the Elantra also has one of the best warranties in the business. Not bad for lucky number seven. 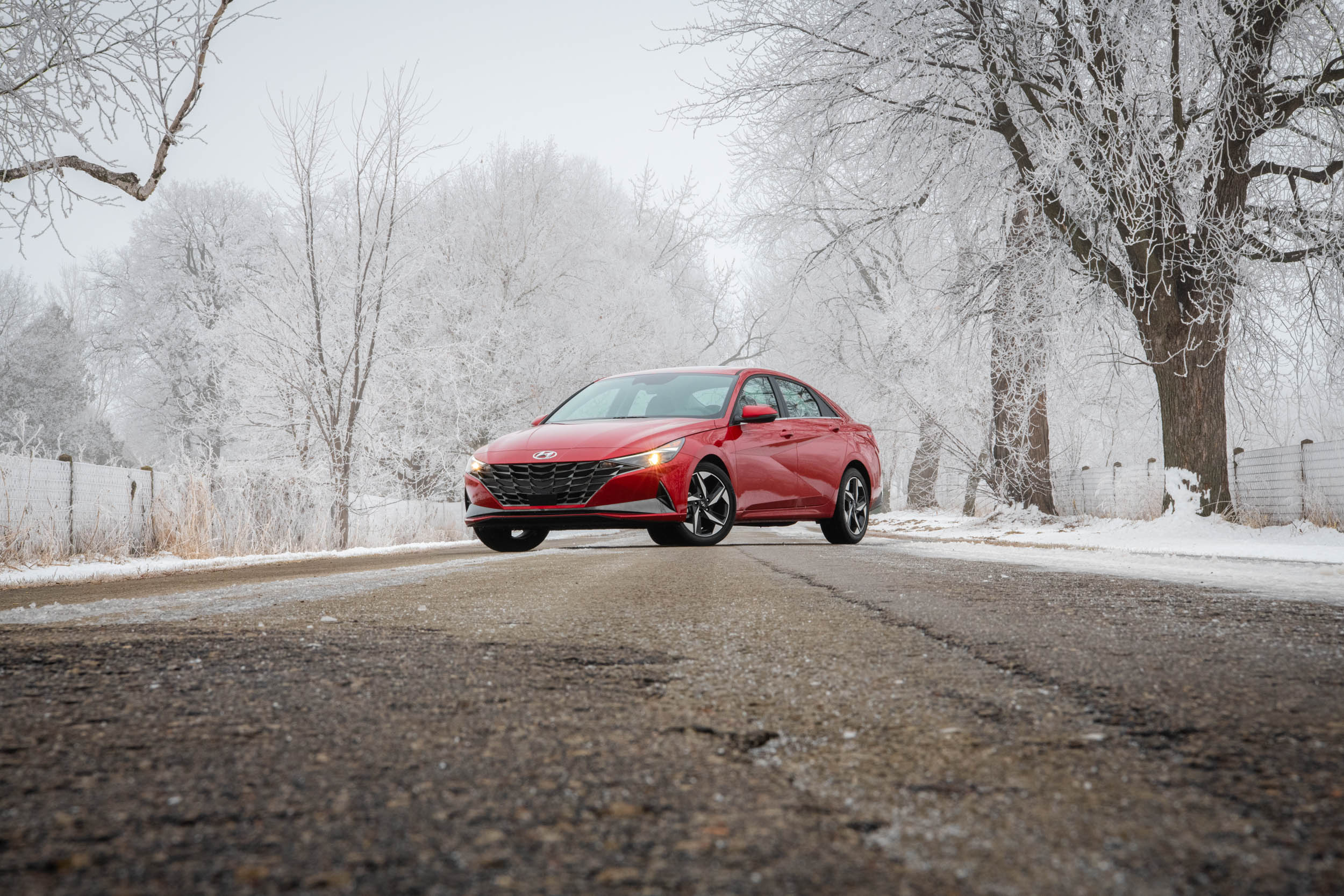 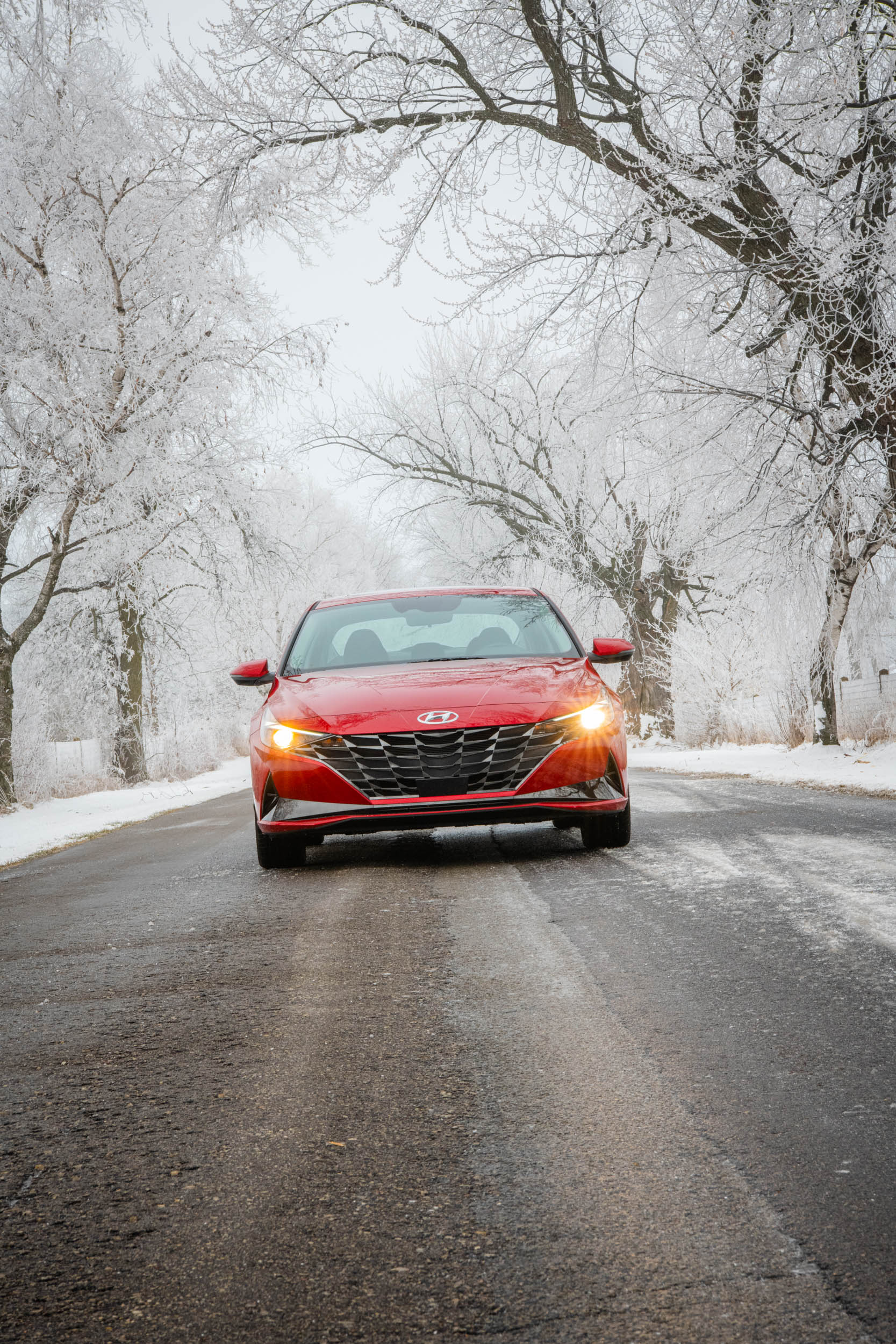 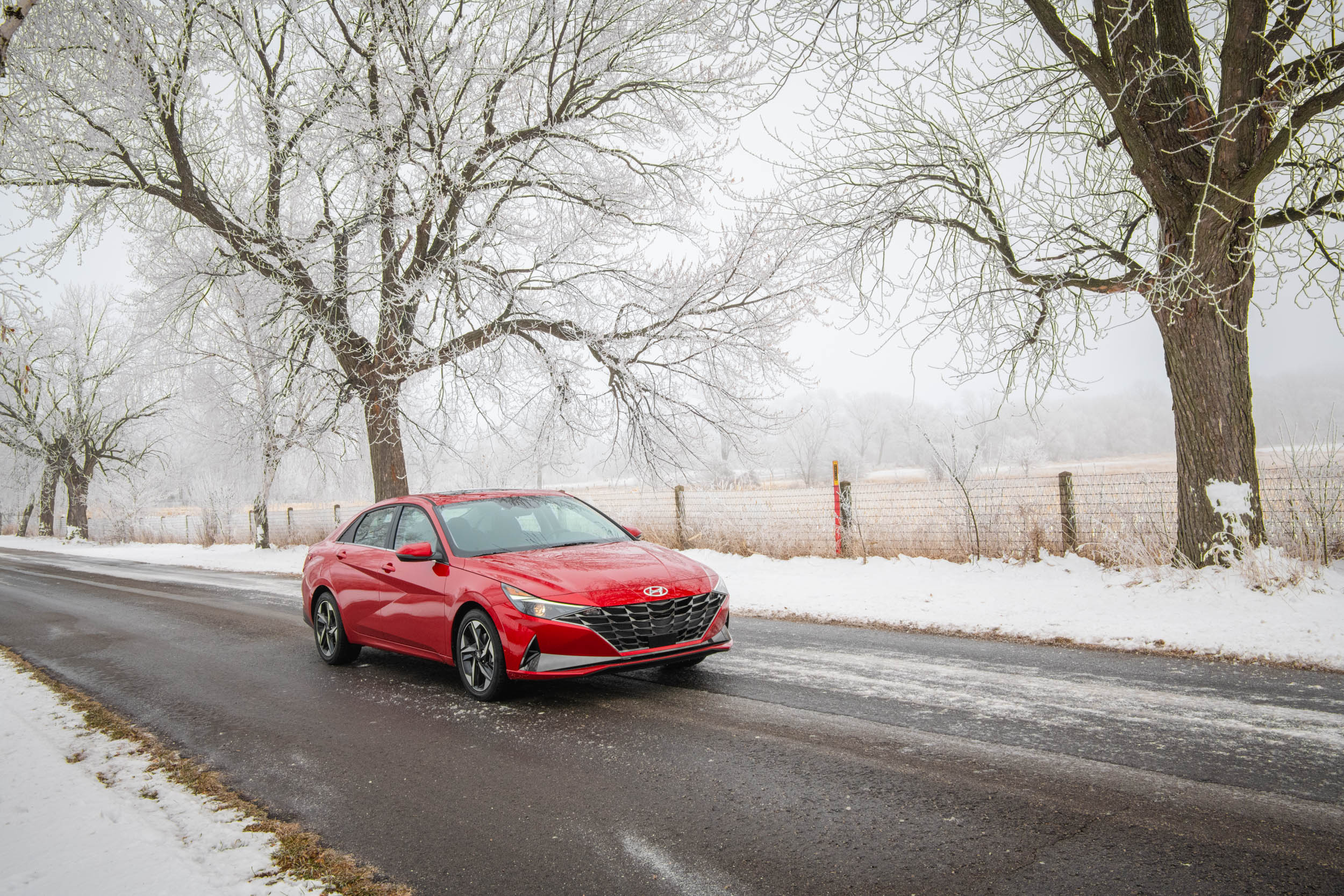 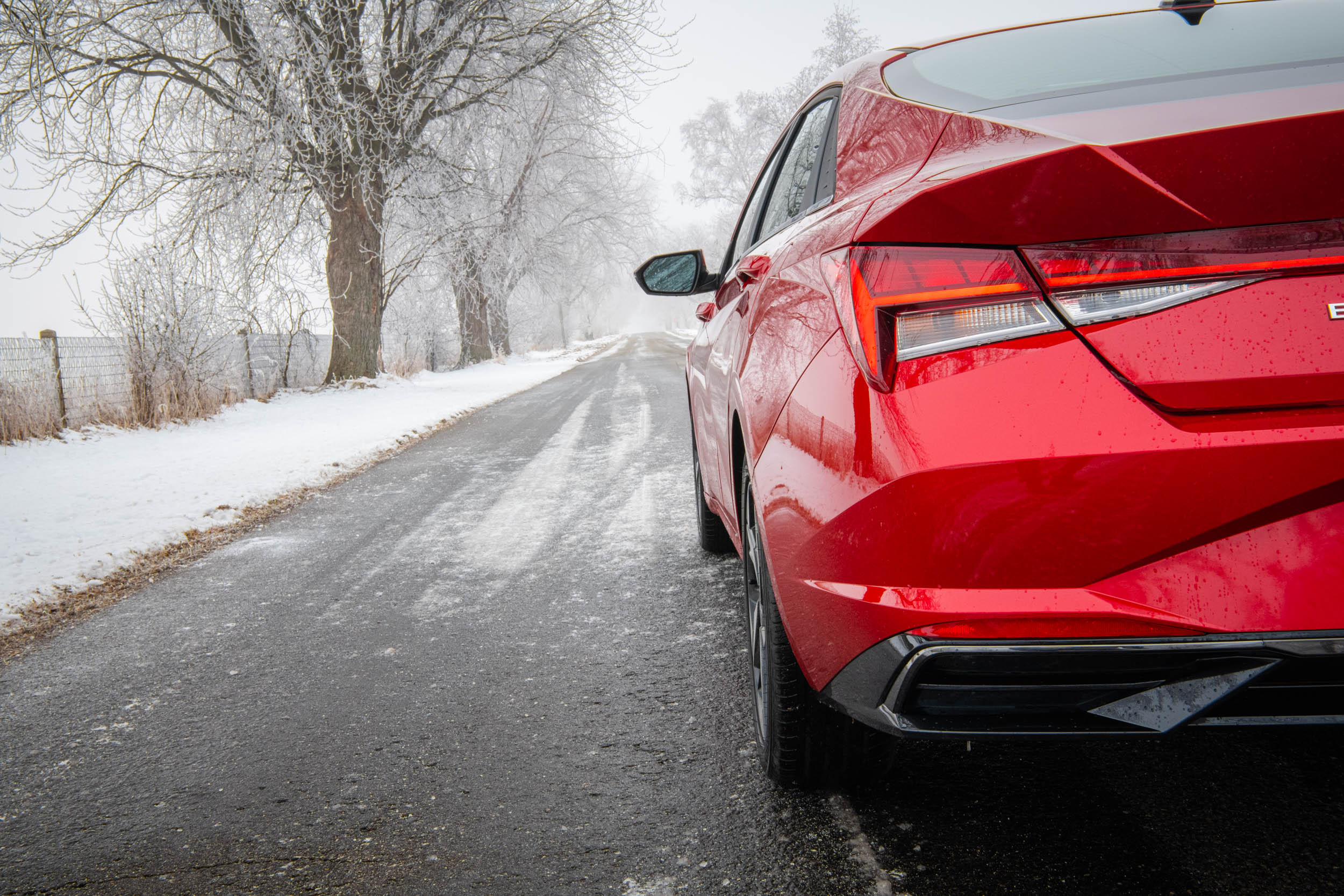 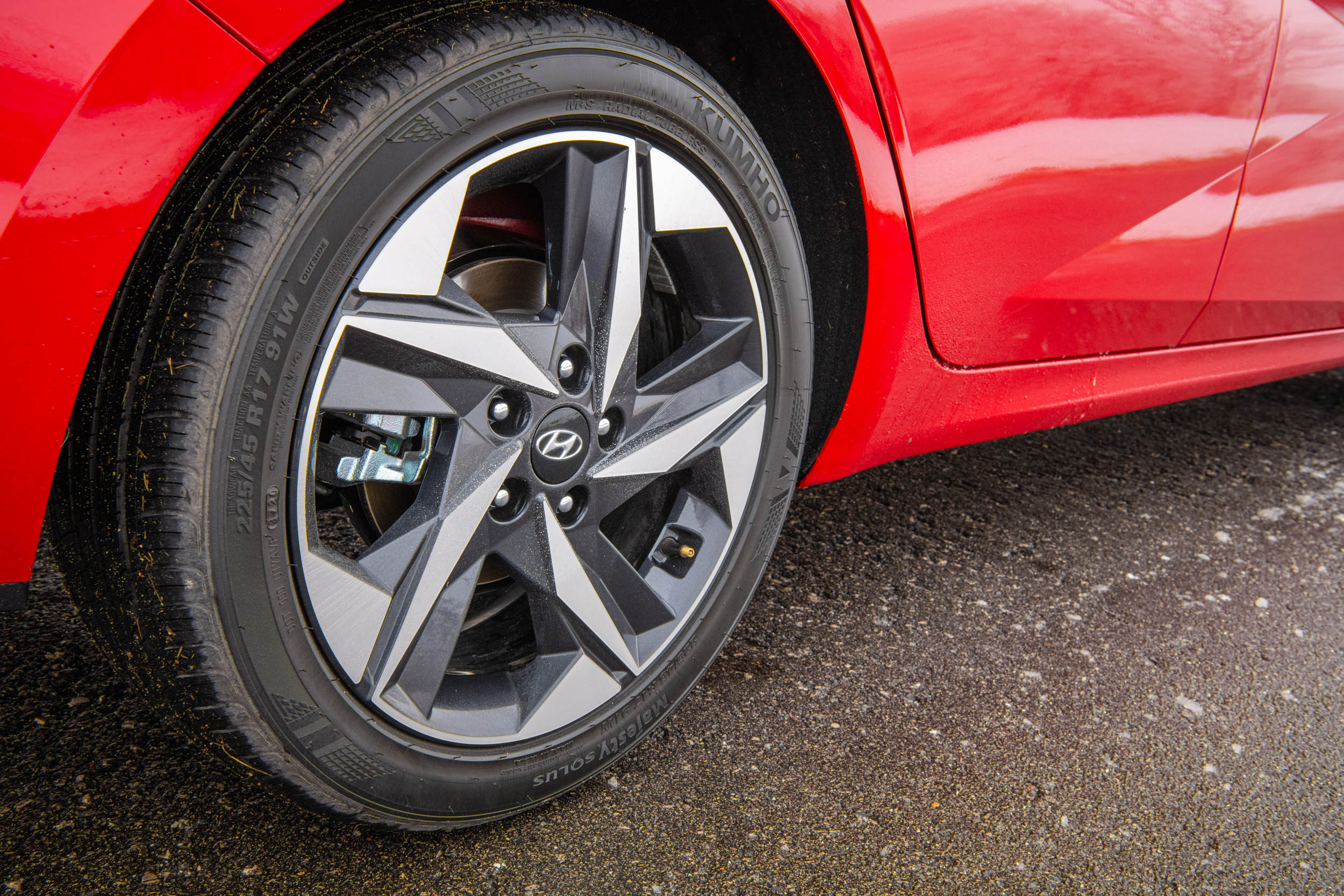 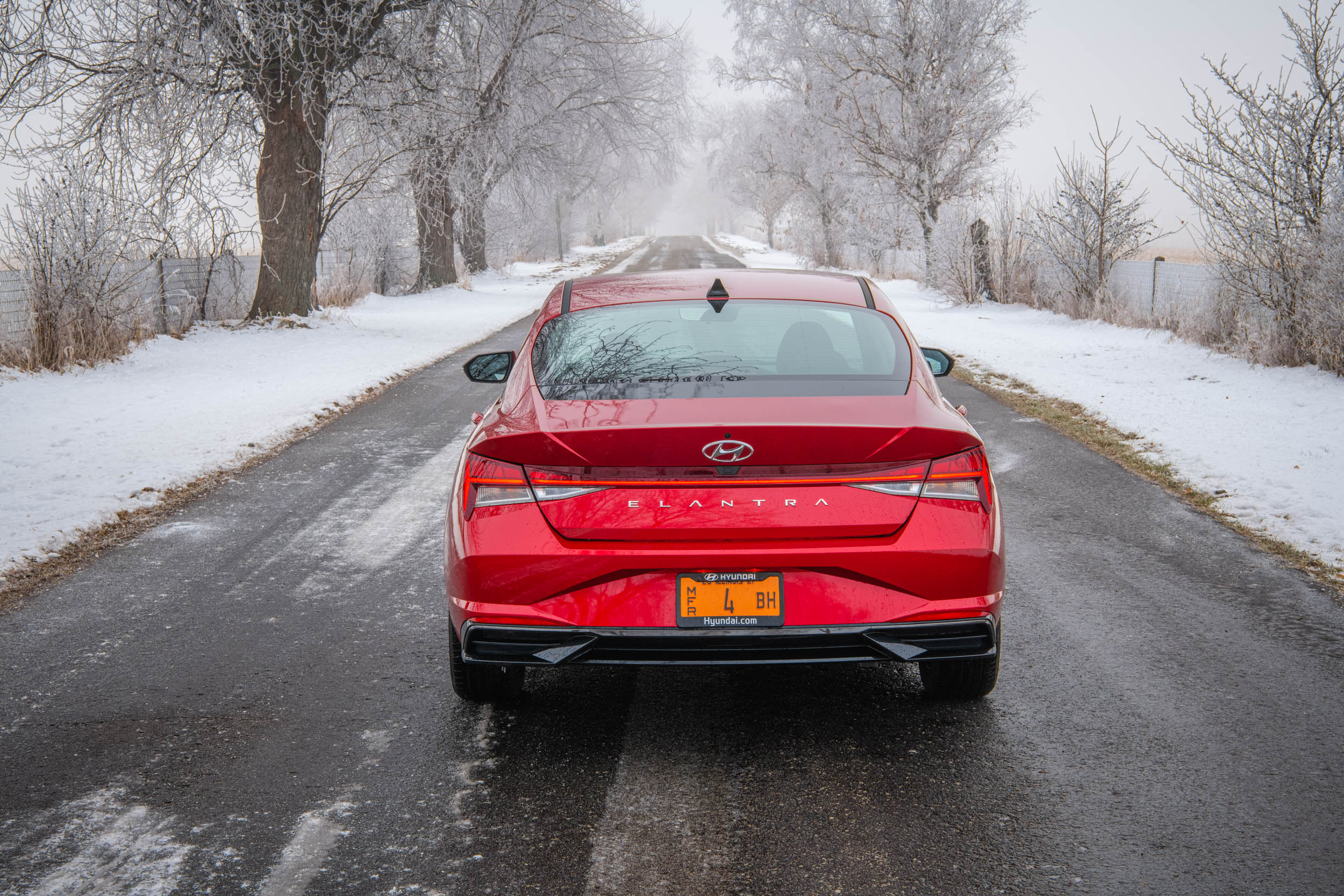 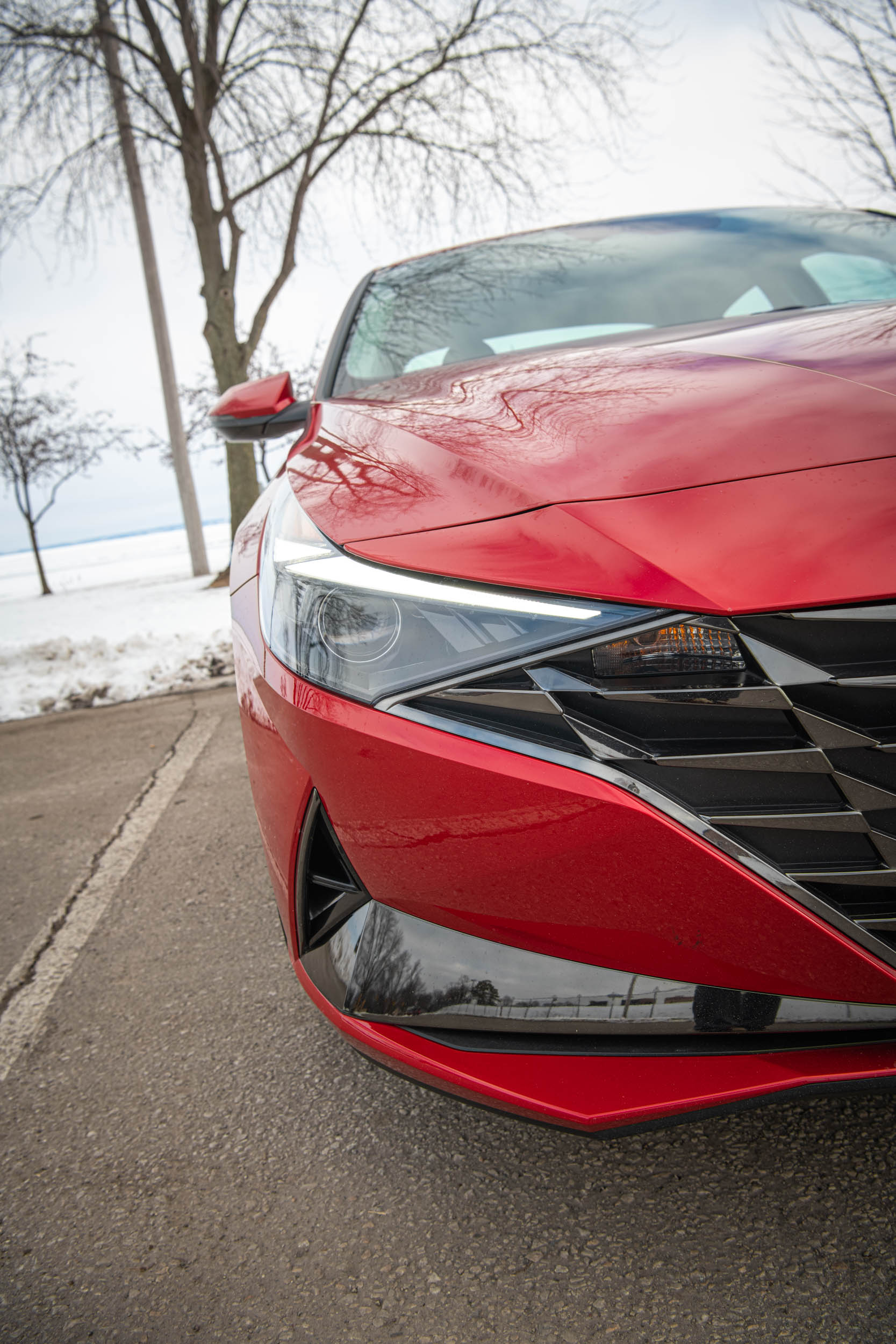 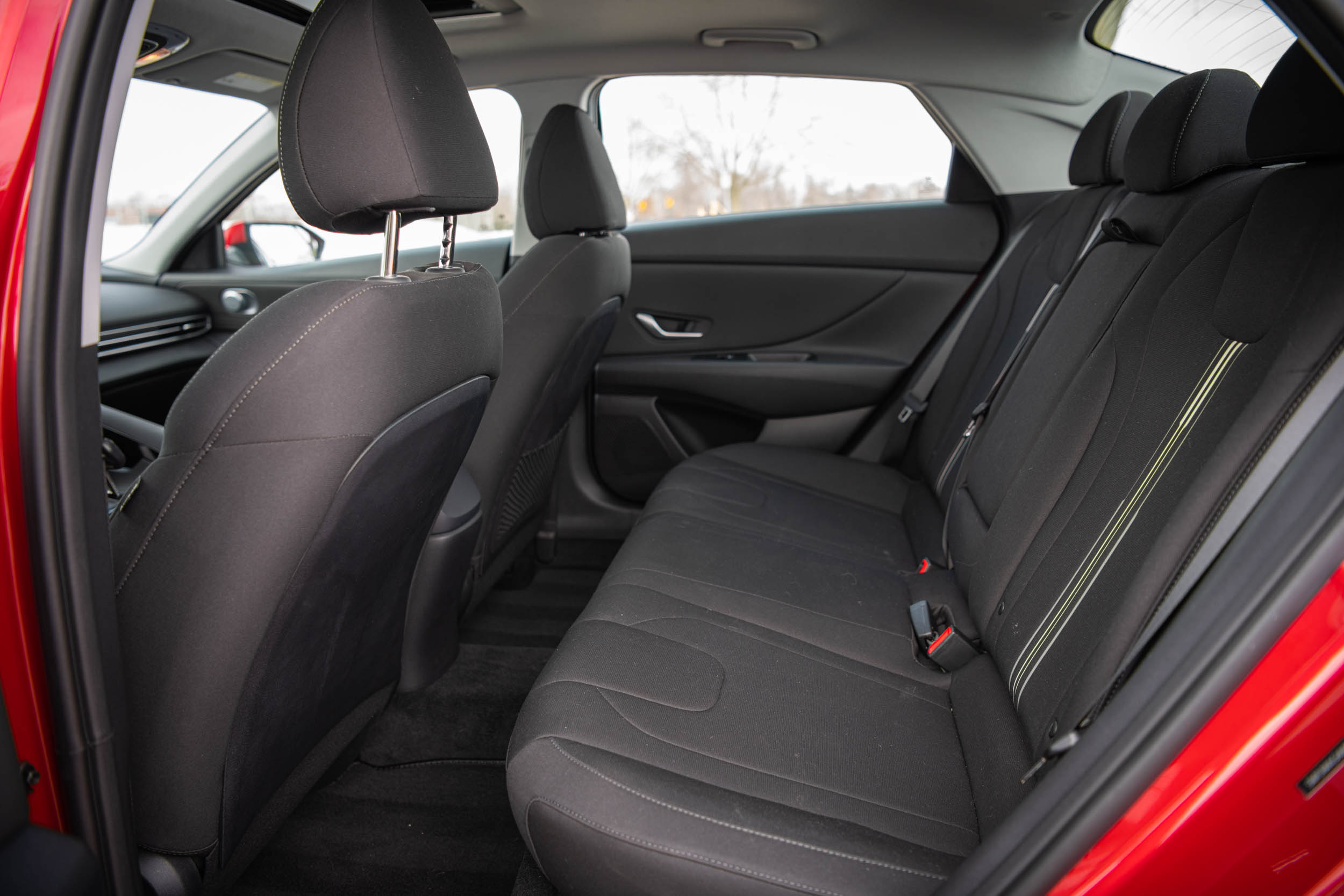 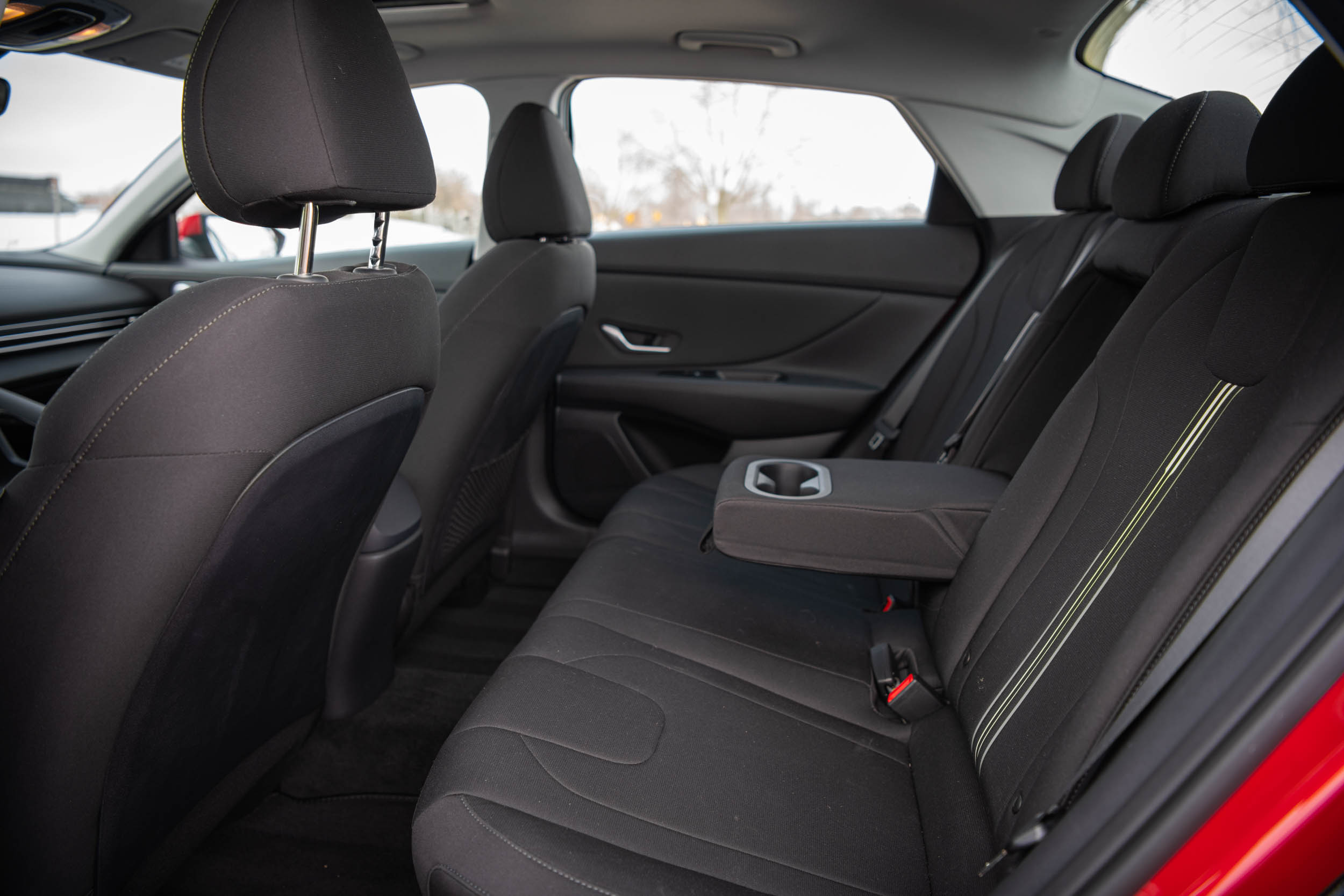 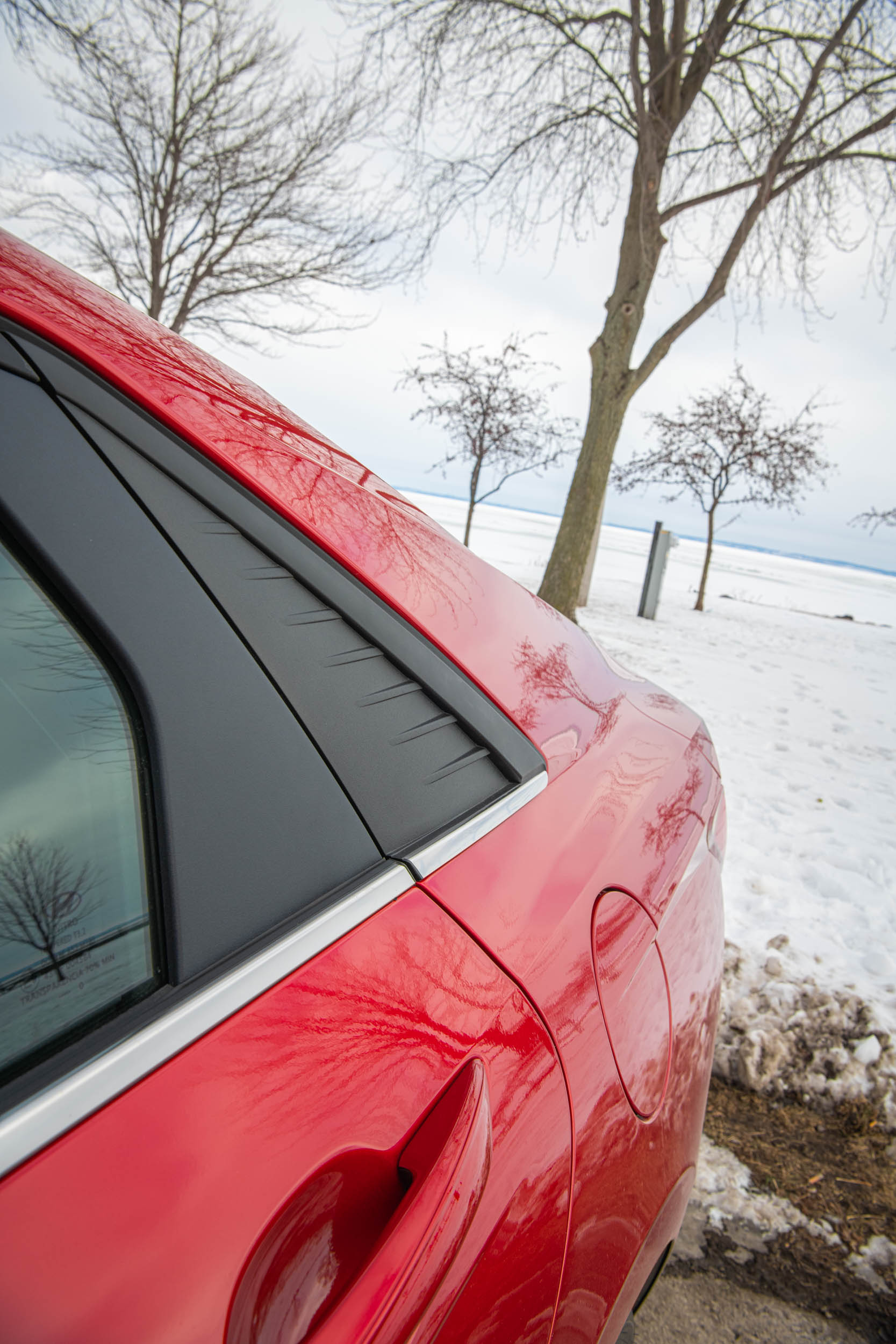