As soon as the 2020 Toyota 4Runner TRD Pro was dropped off at our offices, we knew what we were going to do. Go off-roading.

If you had this real-world Tonka truck at your disposal, wouldn’t you do the same thing?

Yes, yes, you would.

We were fortunate enough to receive a welcoming invitation from the fine folks at Titletown Jeepers to use the courses at Dirt City Motorplex north of Green Bay. This facility has a dirt track racing circuit along with several off-road trails. Unfortunately, a recent deluge of rain forced us to stay off the track, which was a mud-pit, the likes of which I have never seen before.

But we were offered full use of their off-road trails and couldn’t wait to get there.

The drive from our home office took almost an hour and a half, all on highways and well-paved surfaces. This is not where the 4Runner belongs. There were three of us heading up to put the 2020 Toyota 4Runner through its off-road paces, and we tried — in vain — to have a conversation in the cabin.

There was so much road noise and engine noise reverberating through the interior that our backseat passenger gave up trying to talk to us. On the plus side, there was plenty of room in that second row for our tag-along to stretch out and relax — there is actually room for three full-sized adults back there.

Once we arrived at Dirt City Motorplex we took a walk around with one of the track managers. He wasn’t joking about the mud. My boots darn near came off of my feet as we walked around, and that was just on the roads going in.

The trails hadn’t been touched for several weeks, and there was a heavy layer of leaves obscuring the visible paths through the tightly spaced trees. I couldn’t wait to see if the 4Runner was up to the challenge.

The 2020 Toyota 4Runner isn’t what you might call a “new” platform. In fact, the body-on-frame truck is basically the same vehicle Toyota was selling back in 2011.

That’s a long time to have a vehicle in the market unchanged.

Under that beefy looking exterior is a 4.0-liter V-6 that puts out a modest 270 horsepower and 278 pound-feet of torque. It’s enough to get the 4Runner moving, but not with the authority you might desire in a vehicle this size.

One thing that certainly doesn’t help the motivational factor on the 4Runner is the standard five-speed automatic transmission. This transmission doesn’t offer enough speeds to help with fuel efficiency or to help put the power down in an expeditious manner.

What the 4Runner does offer is amazing off-road abilities.

The body is tall, relatively narrow and long. That shape allows you to pass through off-road obstacles nerve free, unless you have to cut a corner really tight. That’s when the room in the back end becomes a trade off against off-road skills. A shorter wheelbase and shorter body would increase the ability to weave in and out of trails, but I would prefer to keep the room behind the front row.

As far as off-road magic, the 4Runner has two and four high, four low, not to mention “A-Trac,” which stands for “Active Traction Control.” A-Trac detects wheel slippage and applies brakes to those wheels that are slipping allowing power to go to the wheels with traction.

On top of that, if you look up by the rearview mirror, there are two dials that offer Crawl Control and a Multi-Terrain Select system. The Multi-Terrain system allows you to choose from Mud, Sand, Rock or Mogul to help you along the way when pavement is in that rearview mirror. Crawl Control presents the driver with five different speeds, and all you have to do is steer while the system controls engine speed and braking.

Hardware to assist all that software consists of the same Fox shocks that are on hand in the Tacoma TRD Pro with remote reservoirs along with Nitto Terra Grappler tires. There is a cat-back exhaust to offer a little more growl when on the throttle, but to me it sounds more like a vacuum struggling to swallow a fish.

But the 4Runner handled almost everything we tossed at it. The trails were relatively easy to traverse at first. But after a few passes the leaves had been blown away or squashed down into the mud, and the trails became greasy.

We wanted to tackle some rocky terrain but managed to get the front left wheel stuck in a hole designed to swallow Jeeps. We were able to rock the 4Runner out of the hole but couldn’t navigate around that hole to get to the rocks.

Power folding outside mirrors would have helped us to squeeze through a few trees that were off the beaten path but we gave up on the rock pile and decided to tackle some hills instead. After three passes up a particularly daunting hill, the 4Runner started to slip sideways — not a feeling you want when behind the wheel.

The Crawl Control and Mud selection on the Multi-Terrain knob, paired with some excessive speed, presented clear skies and a gravel path on the last attempt.

So, through all of the mud slinging, the 4Runner managed to survive, and the Army Green paint was covered with mud brown.

On the way back home, we decided to stop for lunch in Green Bay. We found a quaint restaurant for soup and sandwiches and warmed up as the outside temperatures were dropping and rain changed to snow.

After lunch, we walked back out to our mud-covered 4Runner and attempted to climb in without getting dirty. The passenger’s seat has a handle on the A-pillar to help with ingress and egress. The driver’s side does not have this, so it posed the greatest challenge.

The step rail on the side of the 4Runner is a little narrow to solidly plant your foot, especially when it is covered with mud. So, dirty pant legs were the order of the day for the rest of the drive home.

The heated seats were a welcome touch and helped to relax my back after the stresses of off-road driving.

However, looking around the interior you can’t help but feel a little short-changed as everything is hard to the touch, and there is an abundance of plastic. There are rubber floor mats for both the front and rear passengers and extra-large cup holders in the center console and the in the doors.

In fact, the interior looks as if you could simply hose it out when it gets dirty — though that is not the case. I am sure the interior would look much the same five years from now.

The biggest plus for me about the interior of the 4Runner is that the controls for the HVAC are amazing! The knobs and buttons are huge which makes them super simple to use — even with heavy gloves on. I sincerely wish other manufacturers would take note of this simple setup — especially Toyota’s own Lexus.

WHAT ELSE IS NEW?

For the 2020 model year, the former 6.1-inch screen has been replaced with an 8.0-inch touchscreen that is compatible with Apple CarPlay, Android Auto and Amazon Alexa.

We did experience a few issues with CarPlay. Most notably, the system would hang on to a phone call even after the person on the other end had already hung up.

Like the HVAC controls, the gauges in the instrument cluster are good-sized and easy to read. They are updated for 2020 and there is a 4.5-inch screen between the speedometer and tachometer that shows varying information including tire pressures — a valuable tool when heading off paved surfaces.

Other new tech in the 2020 Toyota 4Runner includes Toyota’s Safety Sense P (TTS-P) featuring lane keep assist, adaptive cruise control, automatic high-beams and a pre-collision system with pedestrian detection. The steering wheel houses the cancel buttons for the lane keep assist and the pre-collision system. That means they are front and center if you want to turn them off.

It’s nice to have options.

Speaking of options, there is a wonderful feature that our 4Runner TRD Pro had in the cargo area: a movable load tray. This tray pulls out with two stops. The first stop makes the tray line up evenly with the back bumper and the second extends it out past the back bumper by about a foot.

This came in very handy when unloading our camera equipment at the end of the day. We didn’t have to touch the muddy rear bumper.

Another hallmark for the 4Runner remains: The roll down rear window in the back hatch is still present and eternally cool.

Like our review of the Tacoma TRD Pro, the 4Runner TRD Pro falls similarly in line. It is far more fun when the pavement ends.

On road these trucks show their collective weaknesses: loud interior, rough rides and a sincere lack of long-drive comfort.

But when you take them off the beaten path, these trucks shine like few others can. They tackle terrain like the Packer’s Smiths tackle quarterbacks.

I can only imagine how amazing the 4Runner TRD Pro would be with Toyota’s 5.7-liter V-8 and six-speed automatic from the Tundra. Like Superman, it may be able to leap small buildings with a single bound.

Come on, Toyota, give us that 4Runner, and it will be a legend.

Learn more about the Toyota 4Runner at https://www.toyota.com/4runner/ 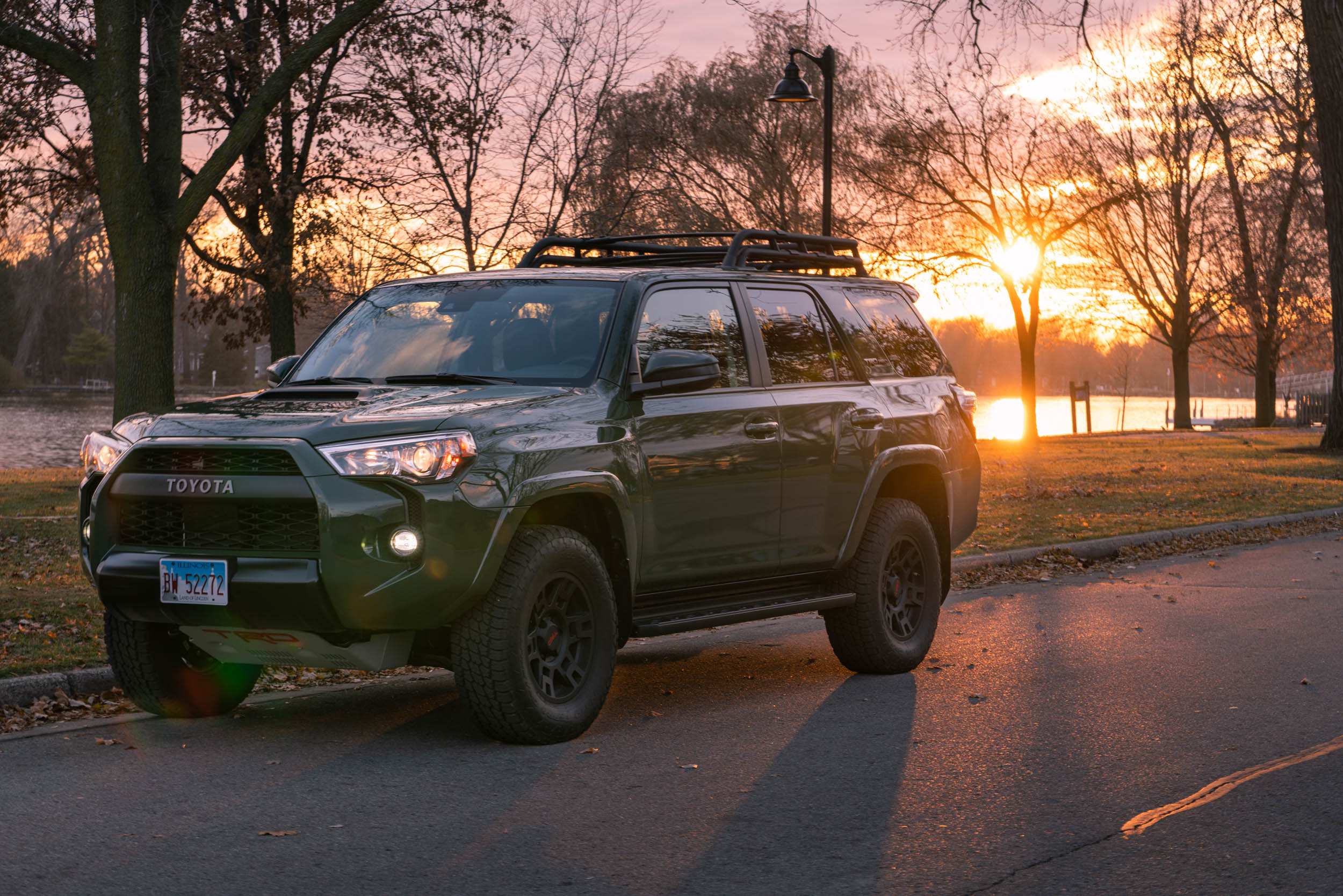 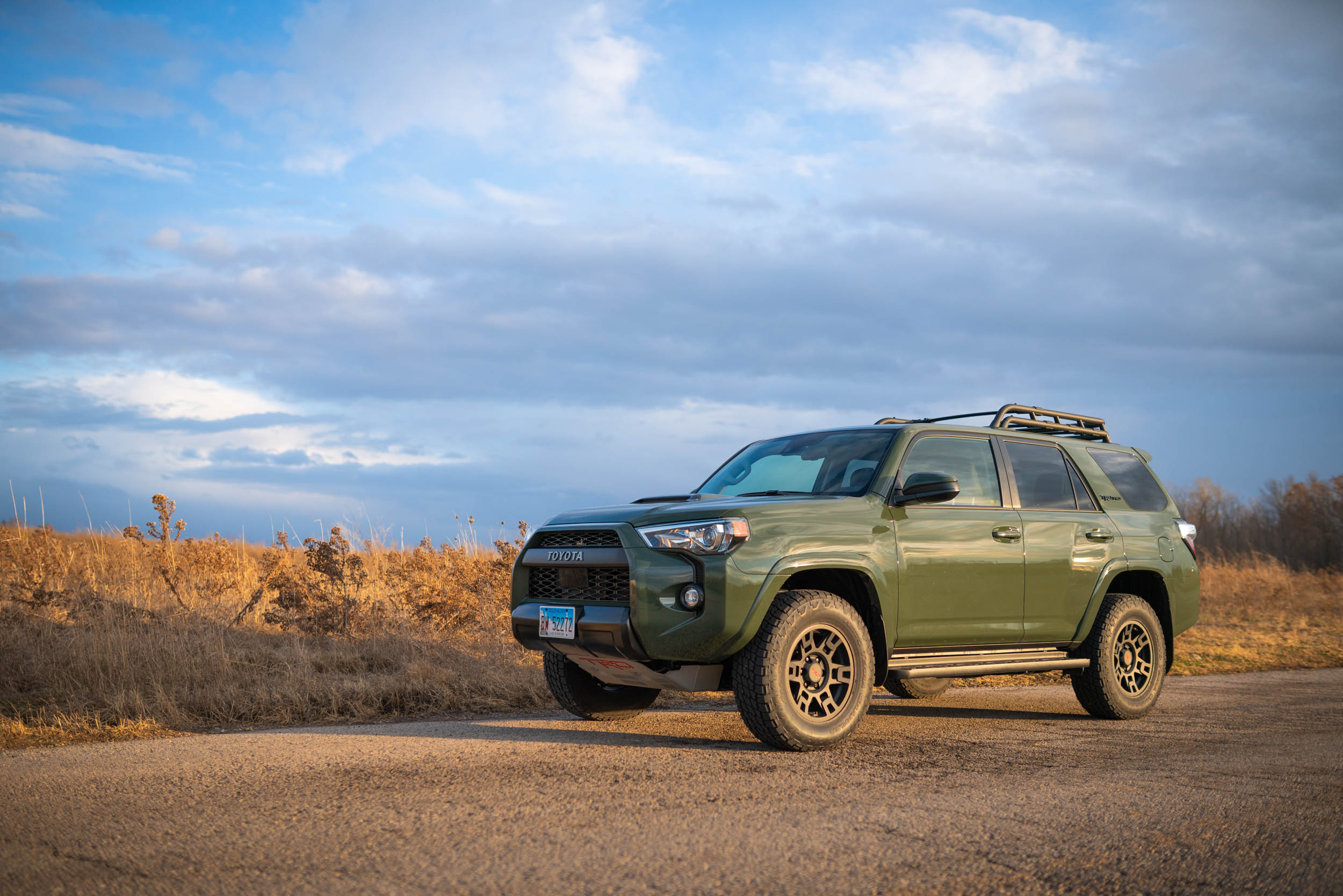 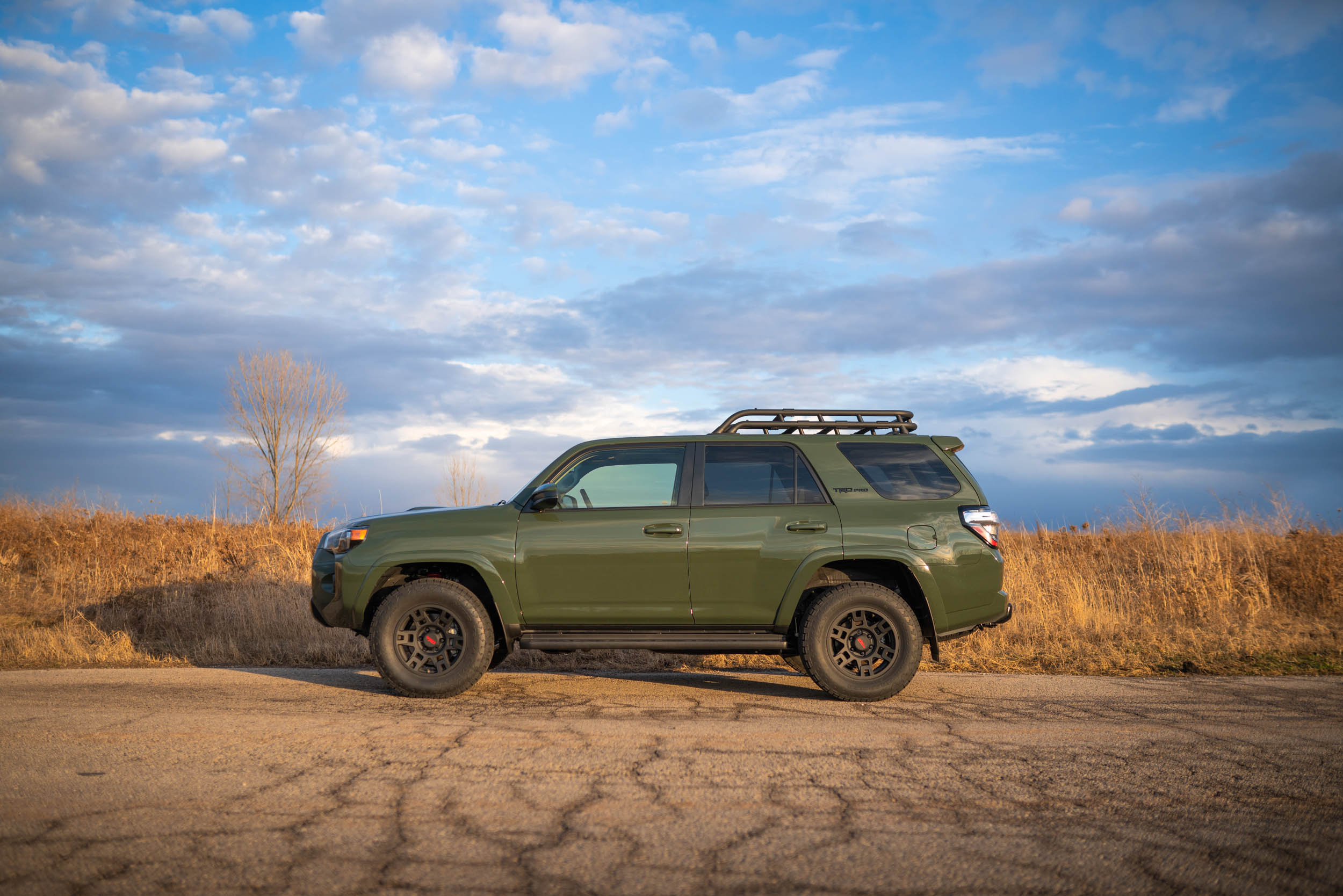 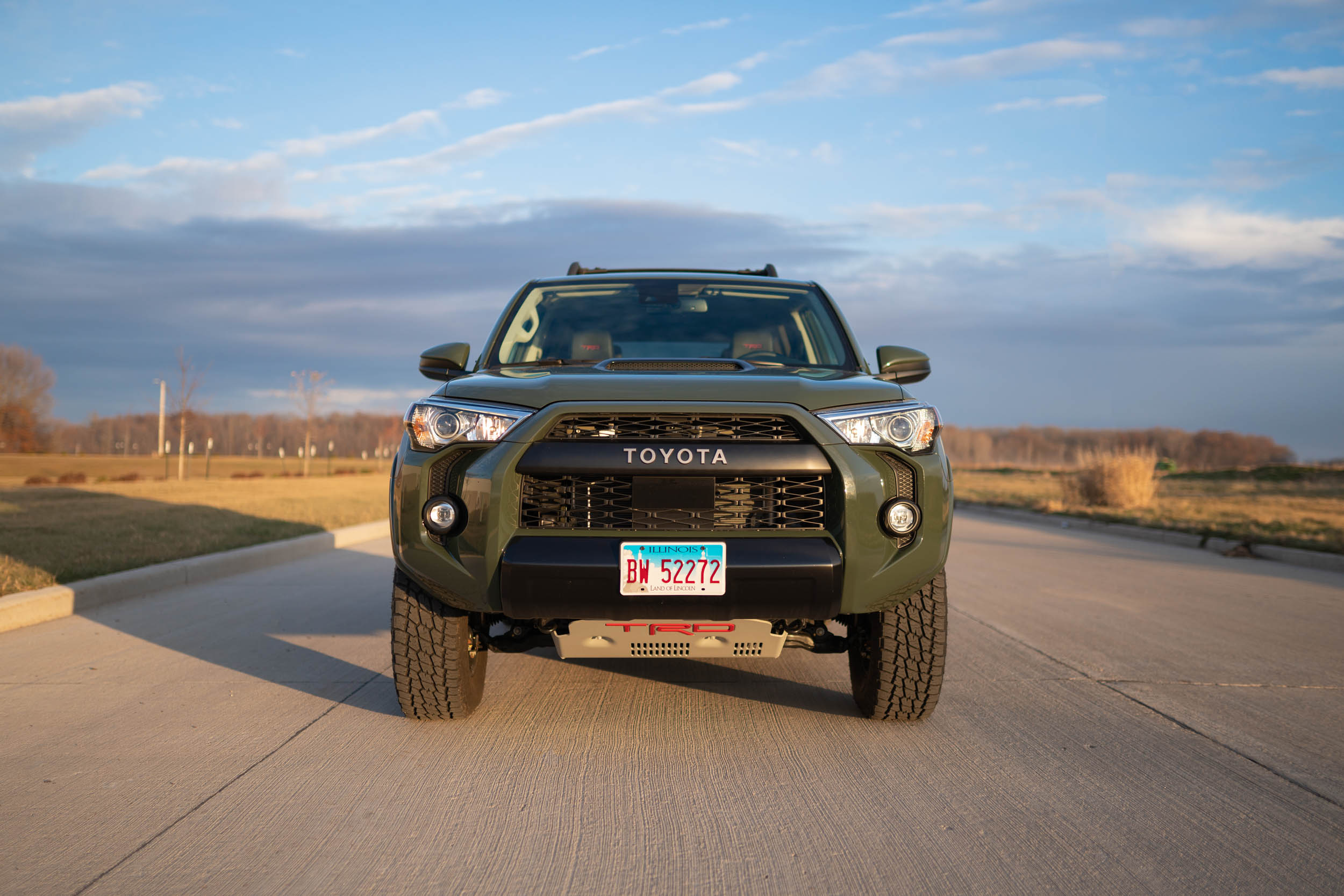 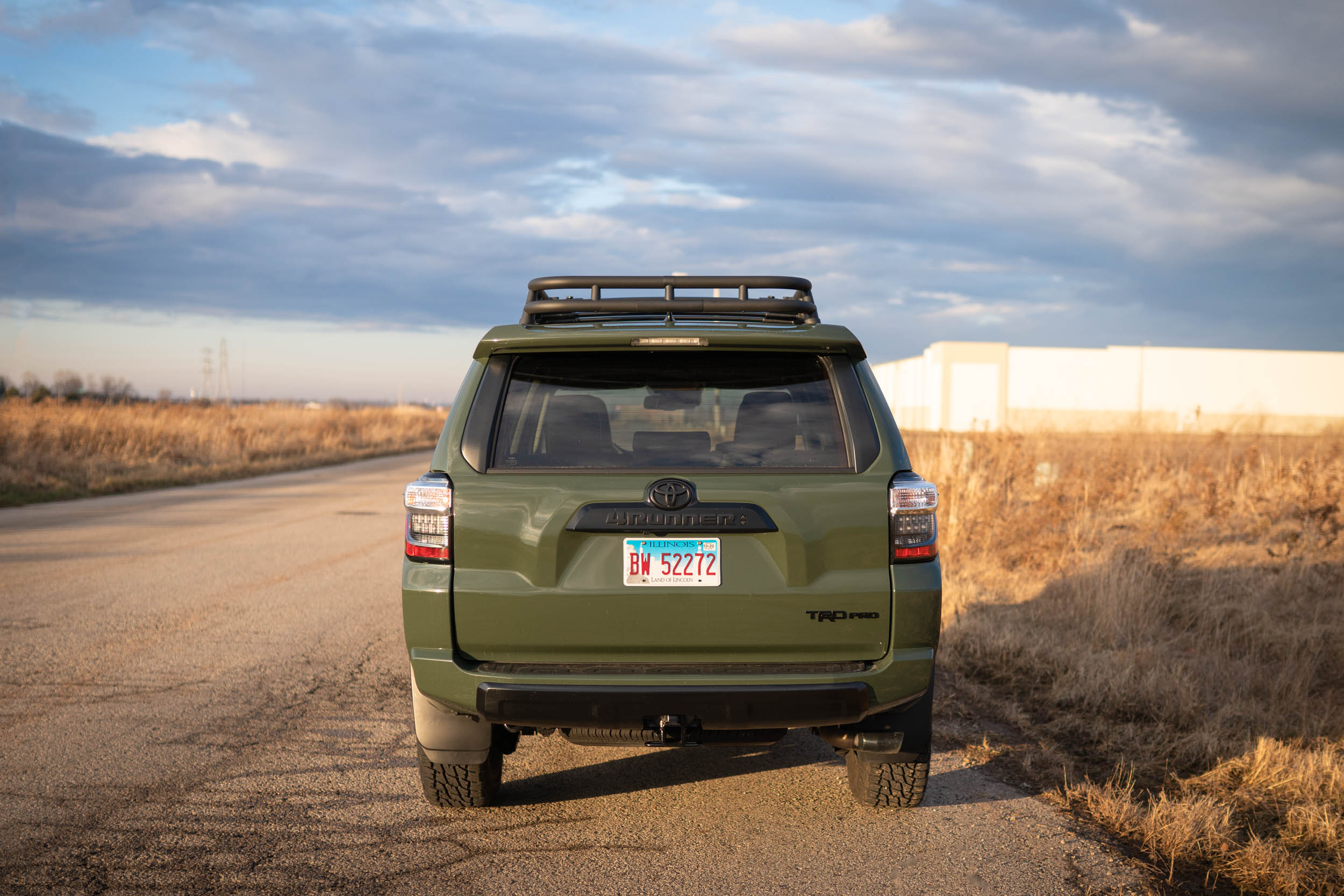 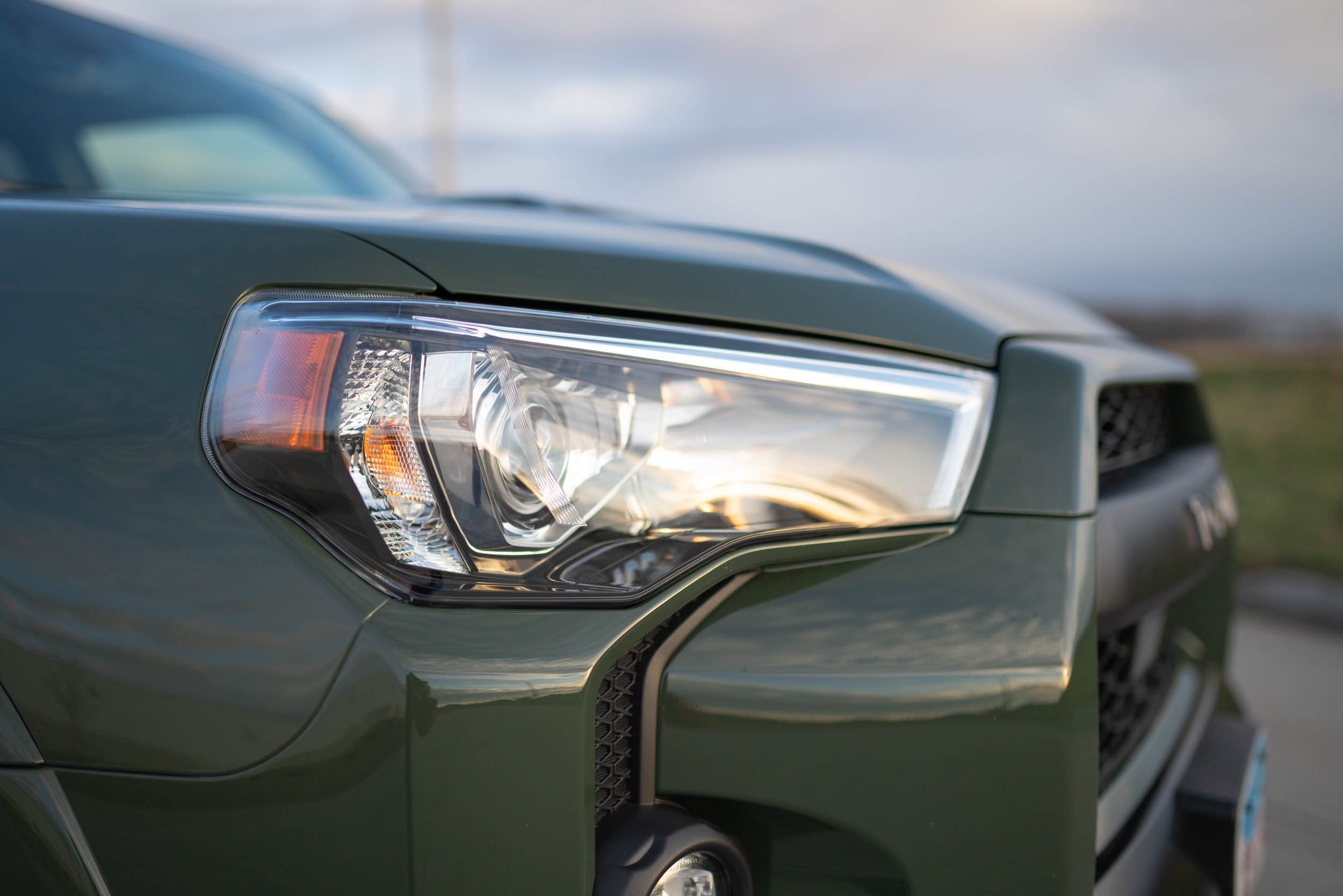 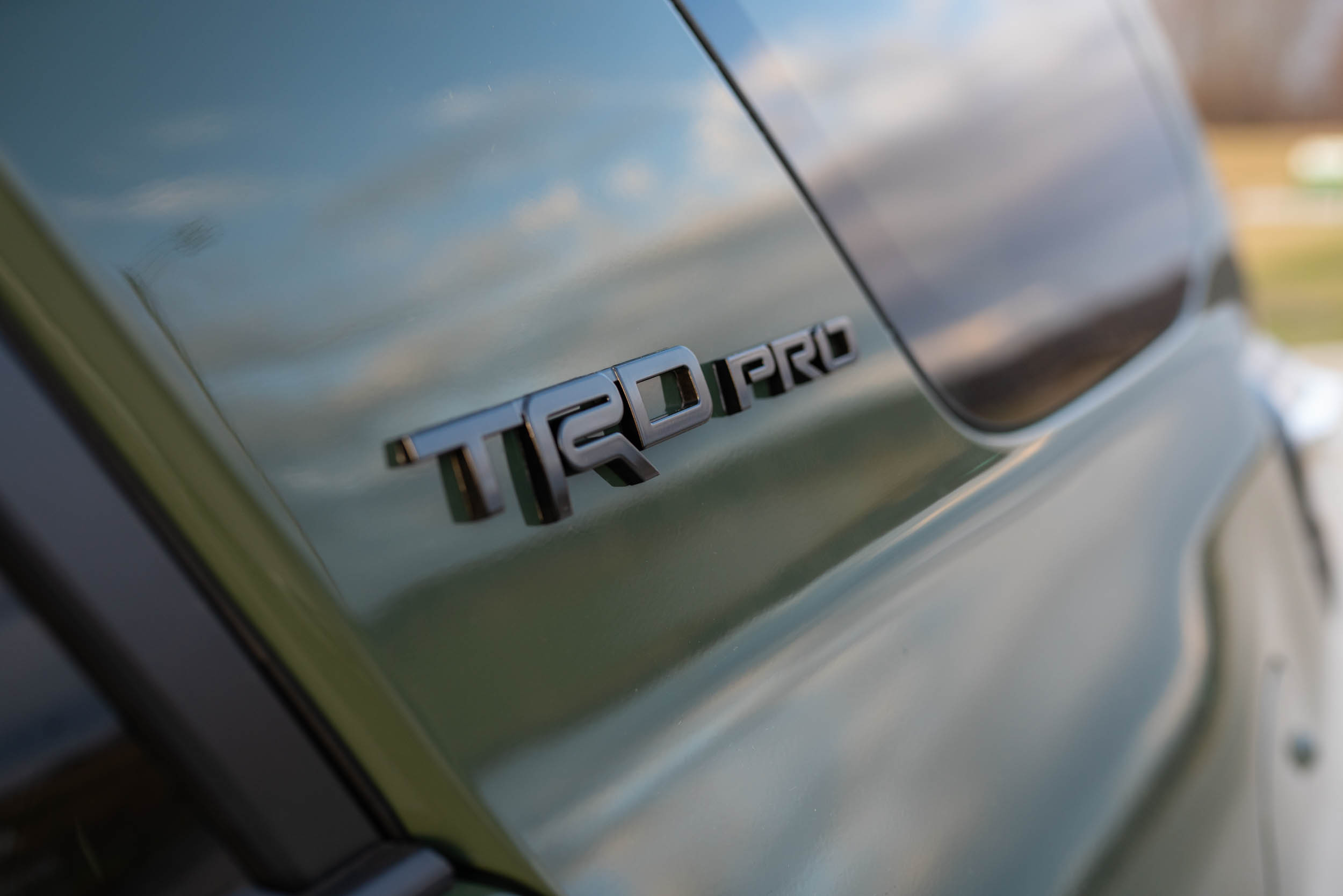 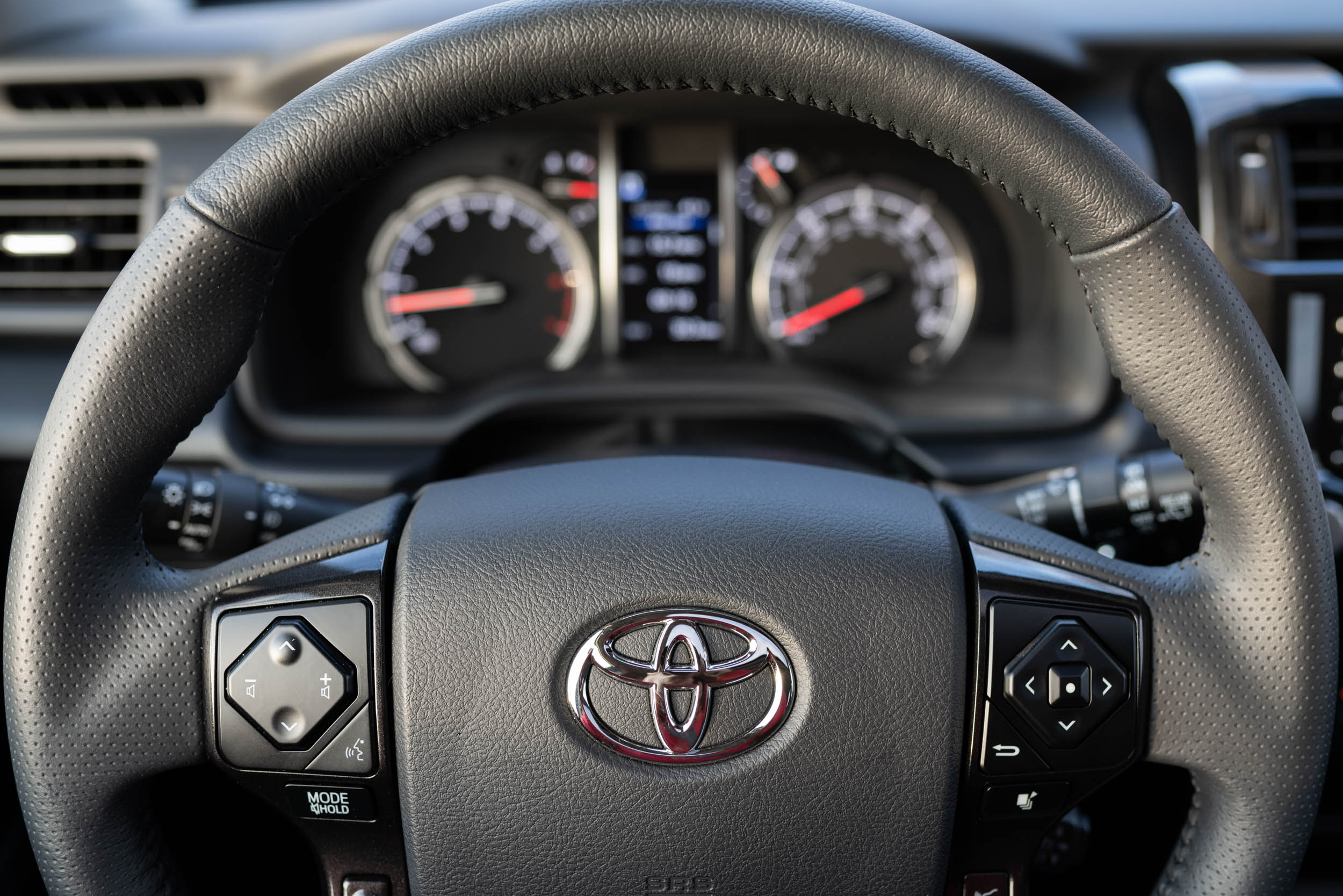 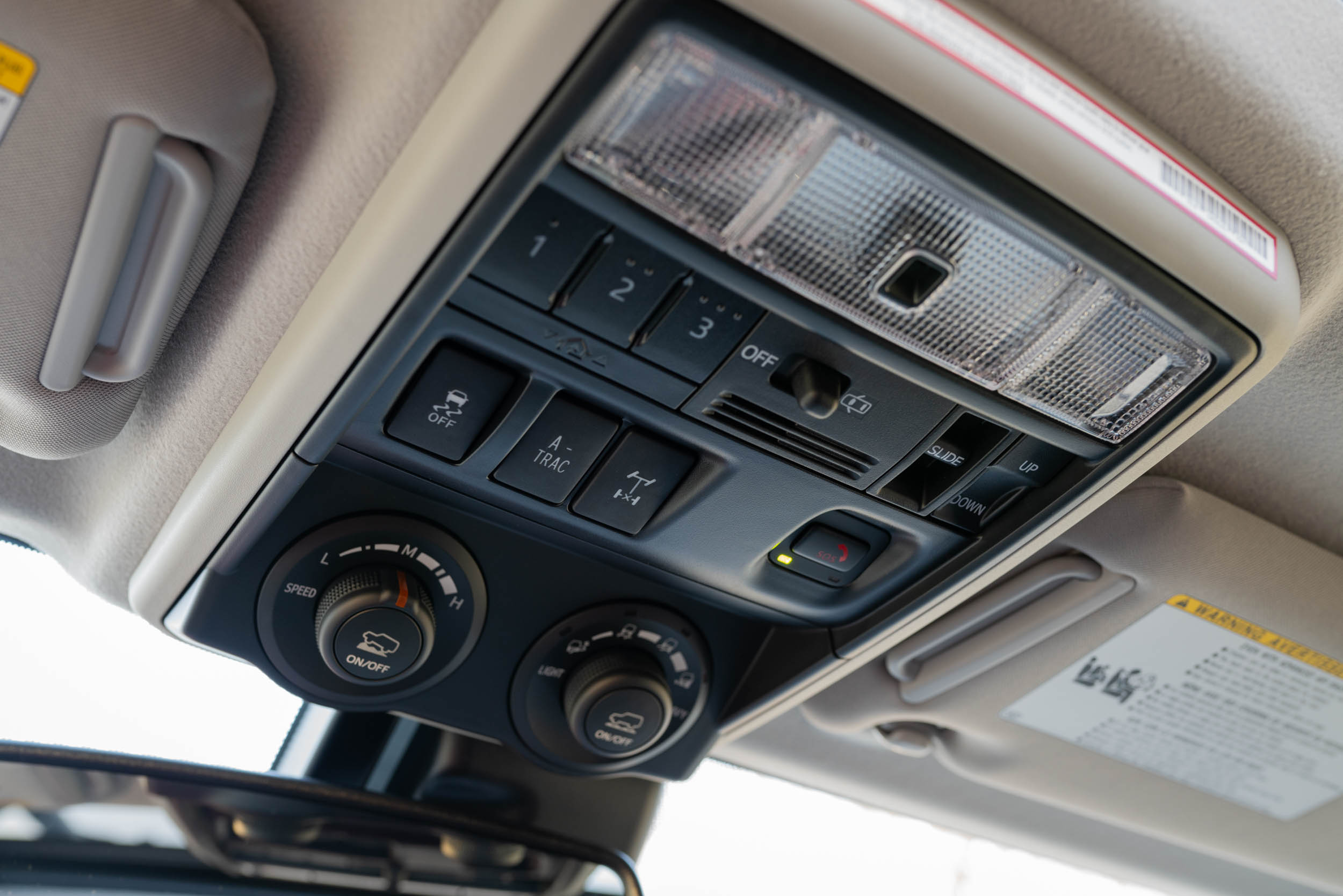 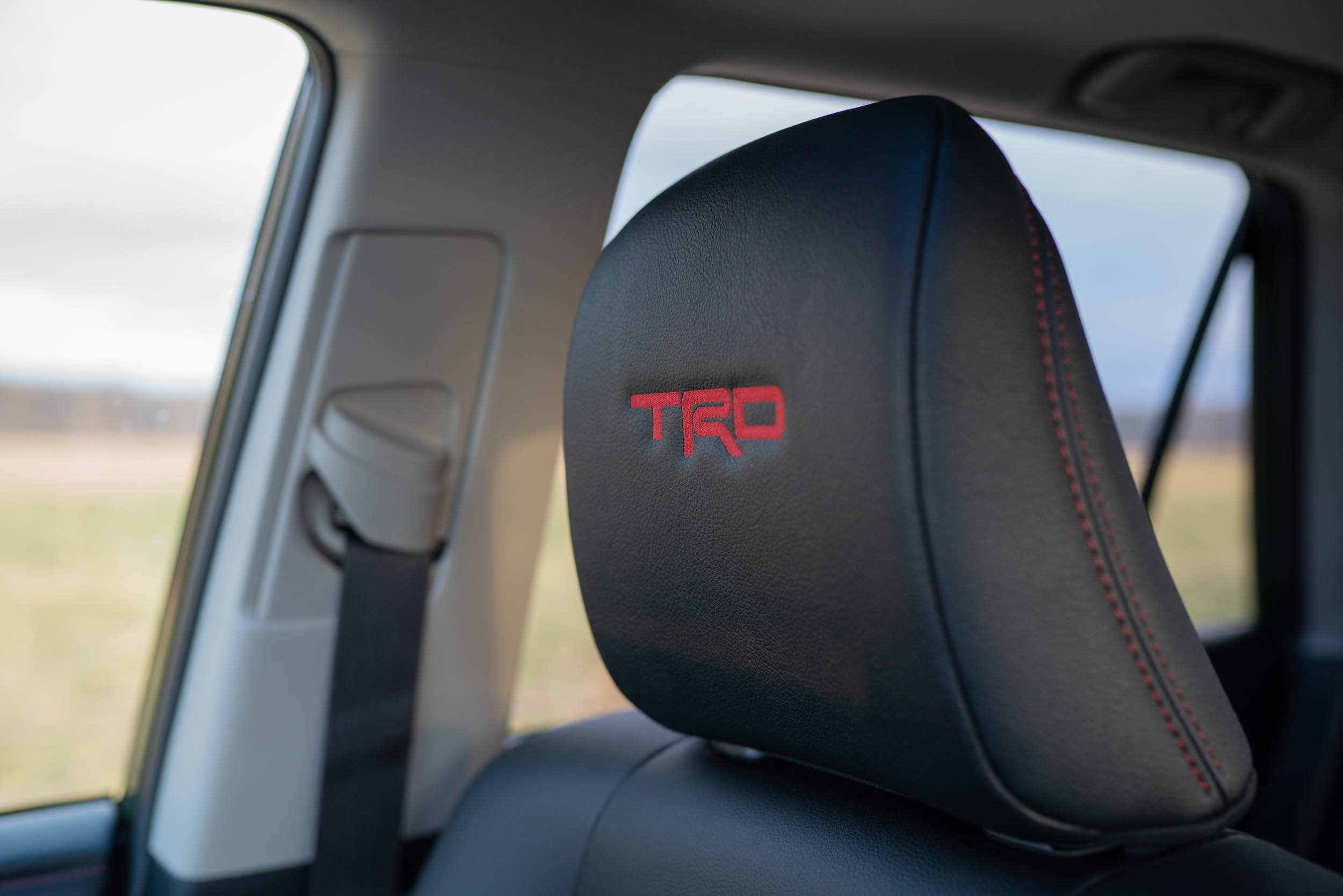 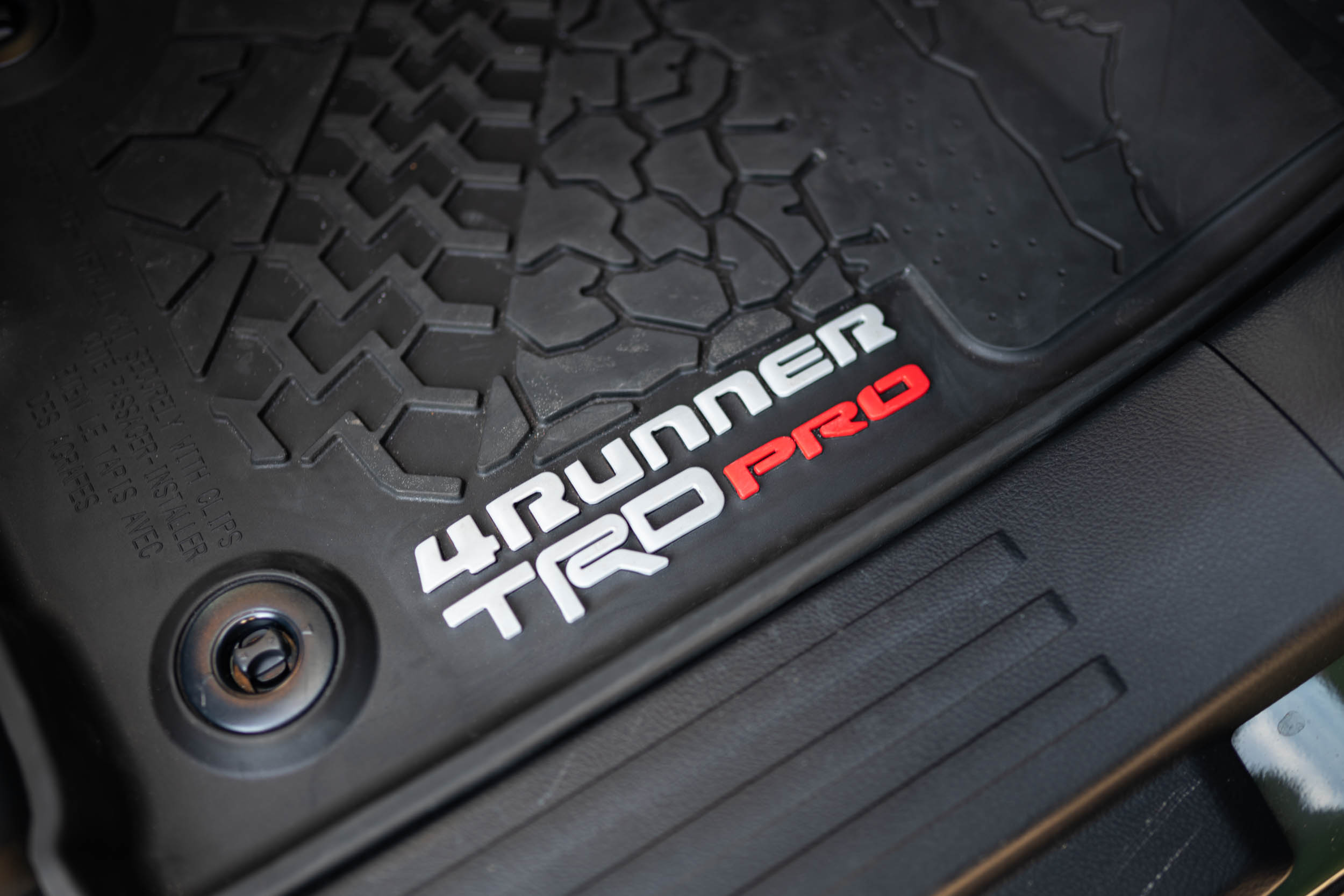