Skip to content
2016 Ford Mustang Shelby GT350: Saddle up to the best pony ever

There are a few things I can surmise about you, dear reader. My first assumption is that you appreciate automobiles that are a cut above in performance, styling and character.

Second, since you have dipped into this particular piece, you are curious about the 2016 Ford Mustang Shelby GT350. You might even be wondering if it’s the car you should buy.

My apologies for the concise spoiler, but the GT350 is simply that good.

In creating the GT350, Ford properly tended to all aspects of the Mustang, from styling to engine to chassis, to provide a truly special performance variant.

At first glance, any onlooker will recognize the car as a Mustang. But let those eyes linger, and subtle GT350 specific nuances come to the surface, all of which have been executed beautifully.

Taken as a whole, the overall styling treatment, while subdued, manages to give the GT350 a look that sets it apart as a distinctly different and angrier beast.

Climbing inside requires hitching each thigh up and over a rigid hip bolster before settling down into the ultra-firm Recaro seat. With extreme bolstering covered in a grippy fabric, these are serious seats that scream: “You are implanted in this seat, sucker!”

There’s a handsome steering wheel covered in micro suede. Round gauges and, in our test car, the absence of a touch screen are welcome and appropriate here.

Overall, this cabin provides a no-nonsense look.  Simple and sane!

On the dashboard, a red “start” button awaits a poke from the driver’s finger. That button is directly wired to a sleeping monster that lives under the hood.

Let’s discuss that monster for a moment. It is a new 5.2-liter, naturally aspirated V-8 code named “Voodoo.” It was developed for use only in this car.

I’ll spare you all the mechanical details, but one component worthy of mention is its flat-plane crankshaft. This offers some benefits over the cross-plane-style cranks found in virtually all other American V-8 engines, such as: 1) better exhaust scavenging and 2) lower mass.

Efficiencies gained with this unique crank allow for a free-revving engine with a screaming high redline — 8,200 in this case. Tip your eyeballs up, and meditate on that for a moment.

I was fortunate to spend a warm sunny day at the helm of a just-broken-in 2016 GT350 — on real roads with an empty passenger seat. While I did not get the car on a race track, I did put it through its paces on every type of road I would likely encounter if the GT350 were my daily driver.

Here’s another spoiler: It was an epic day.

The Deep Impact Blue car was my companion that day, and it had a single option: the Track Pack. This $6,500 option adds MagneRide suspension, heavier duty front springs, a strut tower brace and additional coolers for engine oil, transmission and differential.

The result is a car eminently planted without being a kidney buster.

MagneRide is such a crucial ingredient of the GT350’s special wonderfulness that it should have been standard equipment. And by golly, starting with the 2017 models it is.

I settled deeply into the Recaro seat, pushed the red button, and the very angry monster growled to life.

In Normal mode at start-up, the sound is authoritative but not overly loud. In fact, it has a tone suggesting this is a very loud thing with a rag unpleasantly stuffed in its mouth.

The subtlety feels artificial and a little uncomfortable.

Between Normal and Sport modes, I got the distinct impression Sport is the as-designed mode, and Normal is the afterthought meant to pass drive-by noise regulations.

So, of course I opted for Sport mode, which removes the gag and frees perhaps the most incredible exhaust note I’ve ever heard from a street-legal production car.

A tap of my right toe elicits raucous burbles, crackles and pops. Oh, my. This may well be the loudest stock exhaust system ever.

But the cruise doesn’t really suffer much from the tightly wound nature of this track-day special either.

That insane exhaust note mellows at cruise to a barely audible tone. Plus, the MagneRide dampers do a commendable job of keeping the ride non-abusive.

I opted for Normal mode while cruising, and the ride was always firm and the steering always crisp. There are no “Sloppy” or “Cushy” modes here — exactly as it should be.

On the negative side, however, road noise is somewhat intrusive, and the seats do pinch the hips a bit after a few hours.

Once off the freeway and onto county roads, I found myself smiling at every corner.

Steering, regardless of mode, is instantly responsive. While steering heft and turn-in immediacy are excellent, there is a lack of communication with the pavement, which is all too common with today’s electric steering systems.

Cornering grip, on the other hand, is impressive.

I kept convincing myself to enter turns 5 mph faster than my intuition suggested, and the reward was consistently easy corner carving.

The brakes are on par with the rest of the package. Of course, I felt zero fade on this public road adventure, but I suspect these brakes would provide reasonably fade-free performance on track days as well.

So how about that 526-horsepower engine with its fancy-plane-crank?

This is where I expect a divided camp among Mustang fans. A late-model Mustang GT driver who is used to the Coyote 5.0 engine can be forgiven for wondering: “Where’s the extra hundred horses?”

Well, I’m here to tell you, those extra horses are waiting at the far east end of the tachometer. This new Voodoo 5.2 builds power all the way up to 7,500 rpm — where it finally reaches its 526-horsepower peak.

That’s well beyond the redline of the Mustang GT.

This horse wants to — begs to — be ridden hard.

Shift from gear to gear at 4,000 rpm, and you’ll wonder what all the fuss is about. Convince yourself it’s OK to wind this V-8 out to 8,000+ rpm, and you will be handsomely rewarded.

Me? I chose the reward with every possible shift. And the wonderful thing is, this engine never felt abused when pushed to that range. Rather, it communicates an ever-increasing enthusiasm all the way up to its lofty power peak.

It is as if wringing it out to 8 grand is somehow a mutually satisfying experience. The very first time I — we — made that jump to light speed, I’m pretty sure the GT350 asked if it was good for me, too.

And indeed, it was very good.

That divided camp? You’ll find me on the side where all thumbs are up regarding the GT350’s rev-happy engine.

On the other side, with downturned thumbs, I believe you’ll find the torque mongers — those who prize a good smoky burnout above a balanced-and-engaging driving experience.

A truly satisfied owner of a previous-gen Shelby GT500 — or Dodge Hellcat, for that matter — may not appreciate the power curve of the new GT350. Supercharged beasts lay all their cards on the table right up front.

Stomp your right foot in a GT500, and you will get an instant WAHOO wallop. The thrill happens RIGHT NOW.

Drop the hammer in the 2016 Ford Mustang Shelby GT350, and you’ll get a more genteel shove into your seat, followed by a surge that rises steadily with the tachometer. Both styles of power delivery are thrilling, but not everyone is willing to wring out the thrill. If it is a big smoky burnout you want, you can always hold the revs, and dump the clutch.

Those county roads I was driving led eventually to Twisted Tarmac Scenic Drive. OK, that’s not a real name. But it is a real road with miles of seemingly endless twists through a beautiful forest.

This road pulled it all together for me.

I had already learned to appreciate the thrill the GT350’s engine offers, especially above 4,000 rpm. And the cornering capability of the chassis had become obvious as well.

What Twisted Tarmac Scenic Drive provided was the perfect opportunity to make it all gel.

My first pass along those several miles of tight undulating turns was done in Sport mode, easy on the throttle, with comfortable shift points.

It was a beautiful drive, smooth and enjoyable, set to a deep throaty soundtrack. It was so darn nice that I turned around to enjoy the reverse trip.

Once familiar with the lay of the road, I decided to exercise the car in its preferred half of the tach. Opting for Track mode, I made two more passes, never falling below 4,000 rpm.

Resisting my natural urge to upshift changed the character of the GT350. Every corner exit was a slingshot. Every throttle jab received an instant, urgent response. Driven on a twisty road — or a track — and kept in that oh-so-sweet 4,000 to 8,000 rpm range, the GT350 is tight, tossable and immediately responsive.

Later that evening, cruising through town after dinner, I heard the distinctive WHEE-PFF of a blow-off valve. Checking my mirror revealed a car making its way through traffic to advance on me.

Eventually, the Mitsubishi EVO managed to get next to me.

Pulling beside me at the next light, the two guys in the EVO gushed about how fantastic the GT350 sounds.

Ah, yes, those sounds. That crazy exhaust note thrilled me immediately, and I’m not sure I would ever tire of it. Apparently even the Turbo-4 crowd can dig the sound of this V-8.

There was something that didn’t occur to me until after many hours of driving, and that’s why I hesitate to mention it.

There’s a fair amount of it in the cockpit of the 2016 Ford Mustang Shelby GT350. When I did notice it — especially along the tops of the door panels — it was a reminder that this is a Mustang.

The inclusion of some flimsy trim is less important than the fact that I was surprised by it. Surprised because the top-shelf experience I had driving the GT350 suggested this is a very special car.

And sooooo it is! 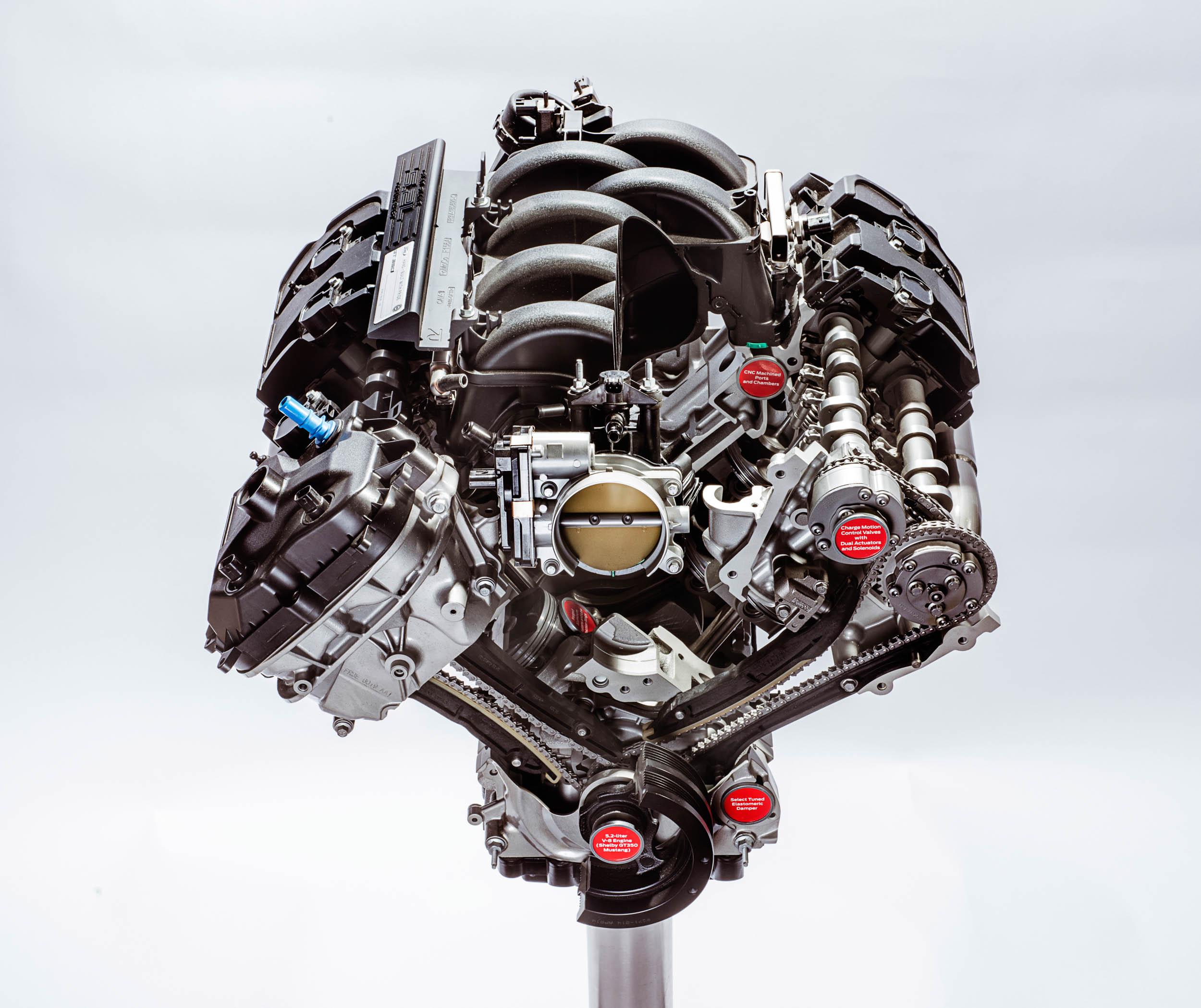 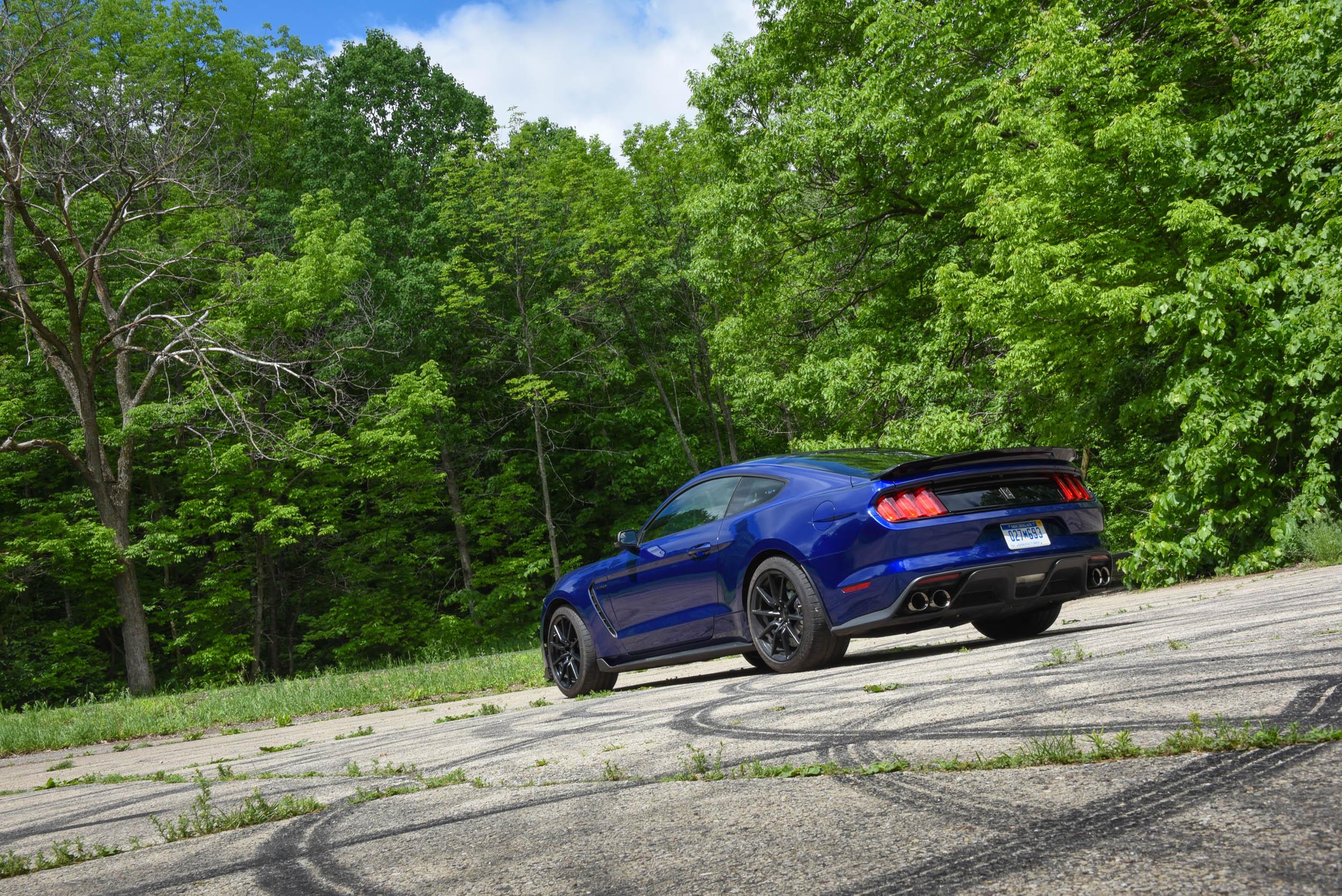 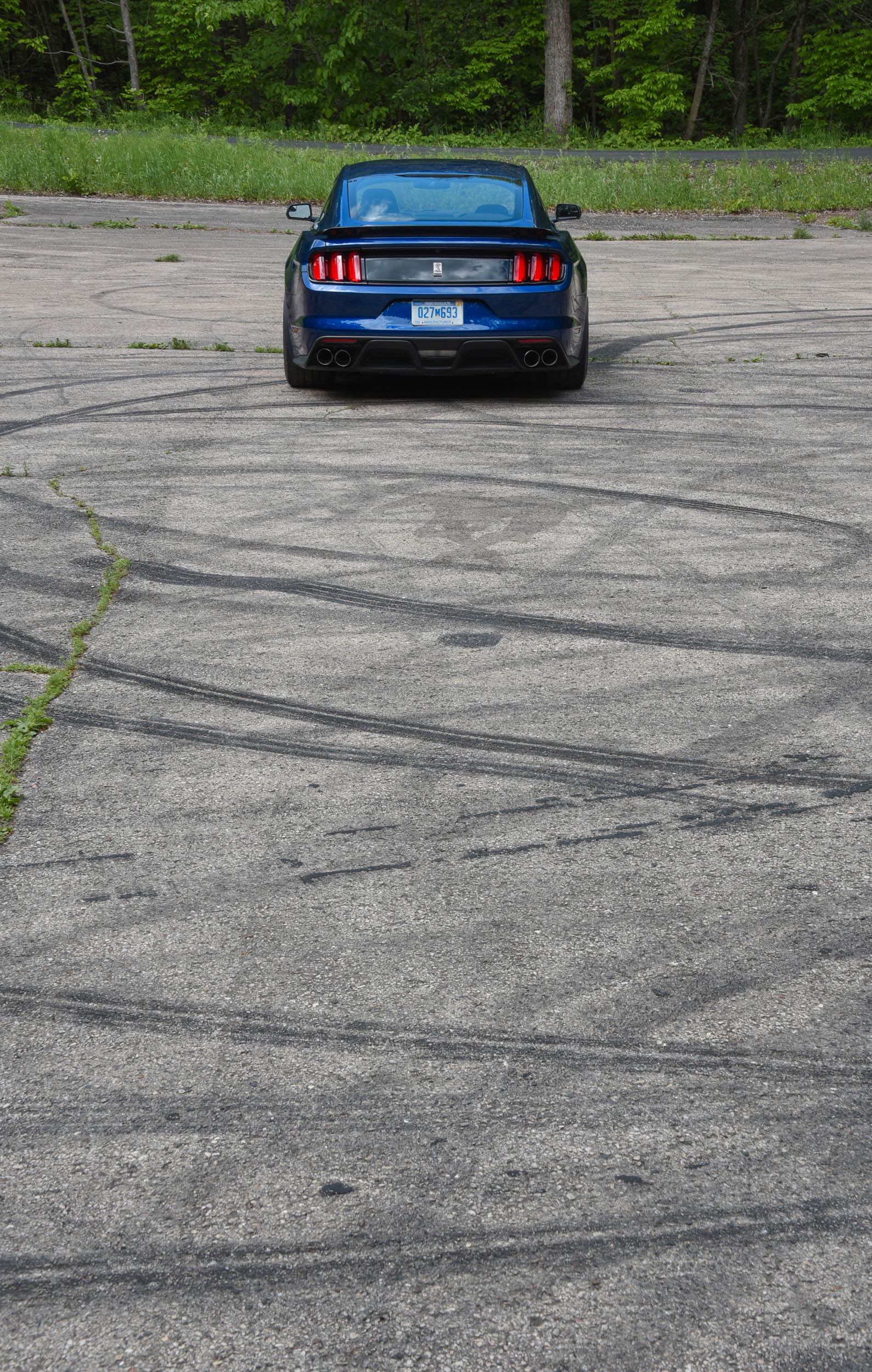 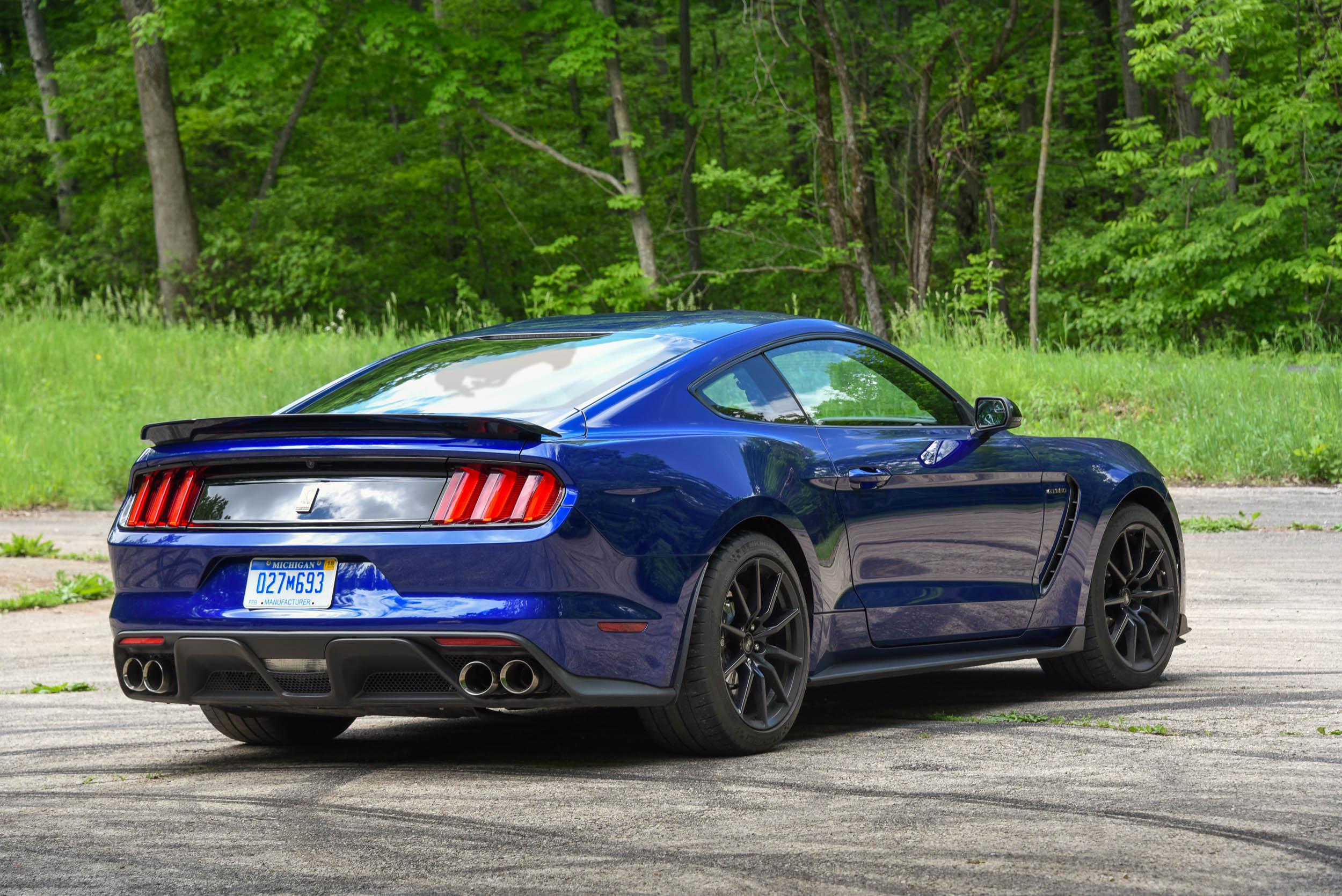 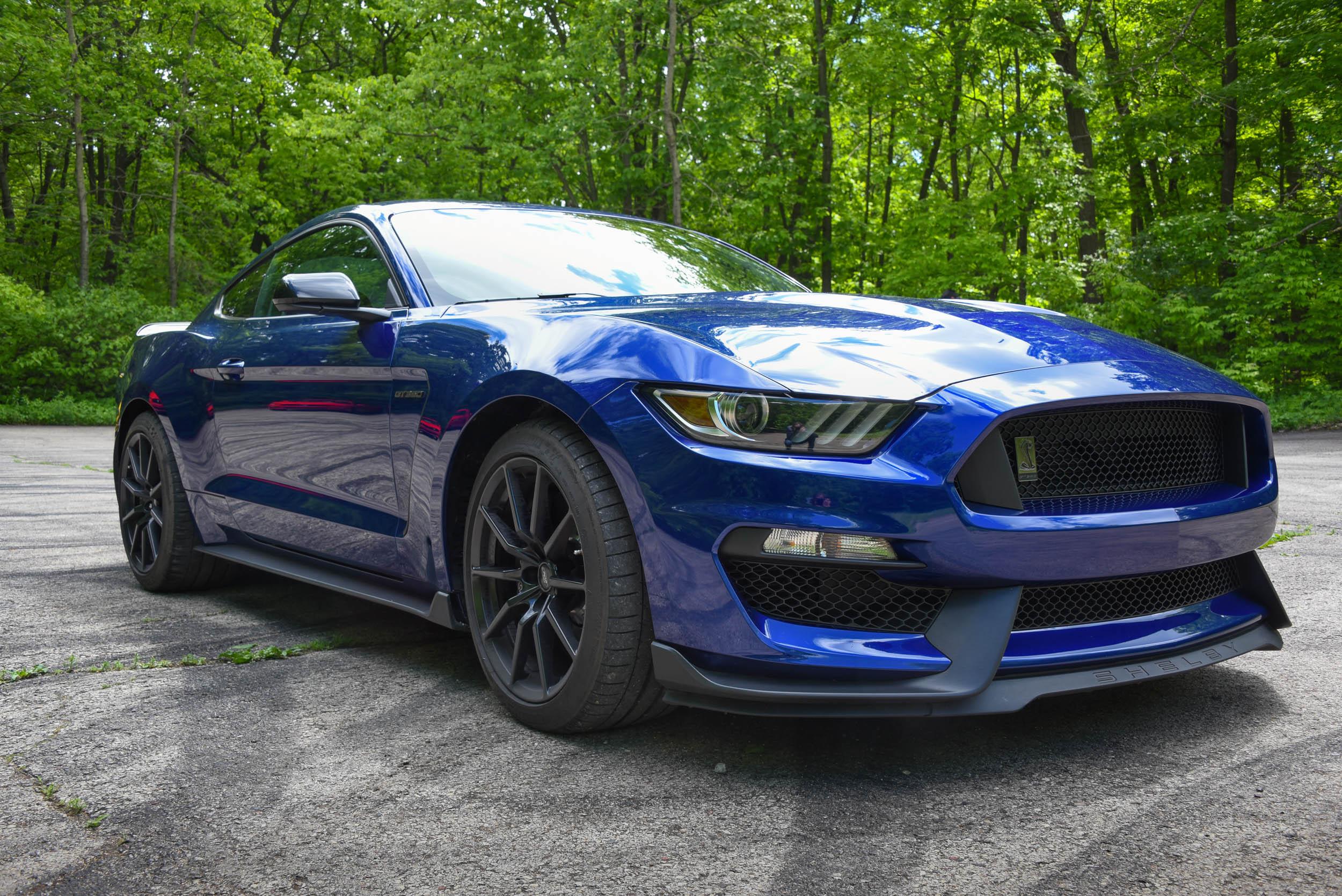 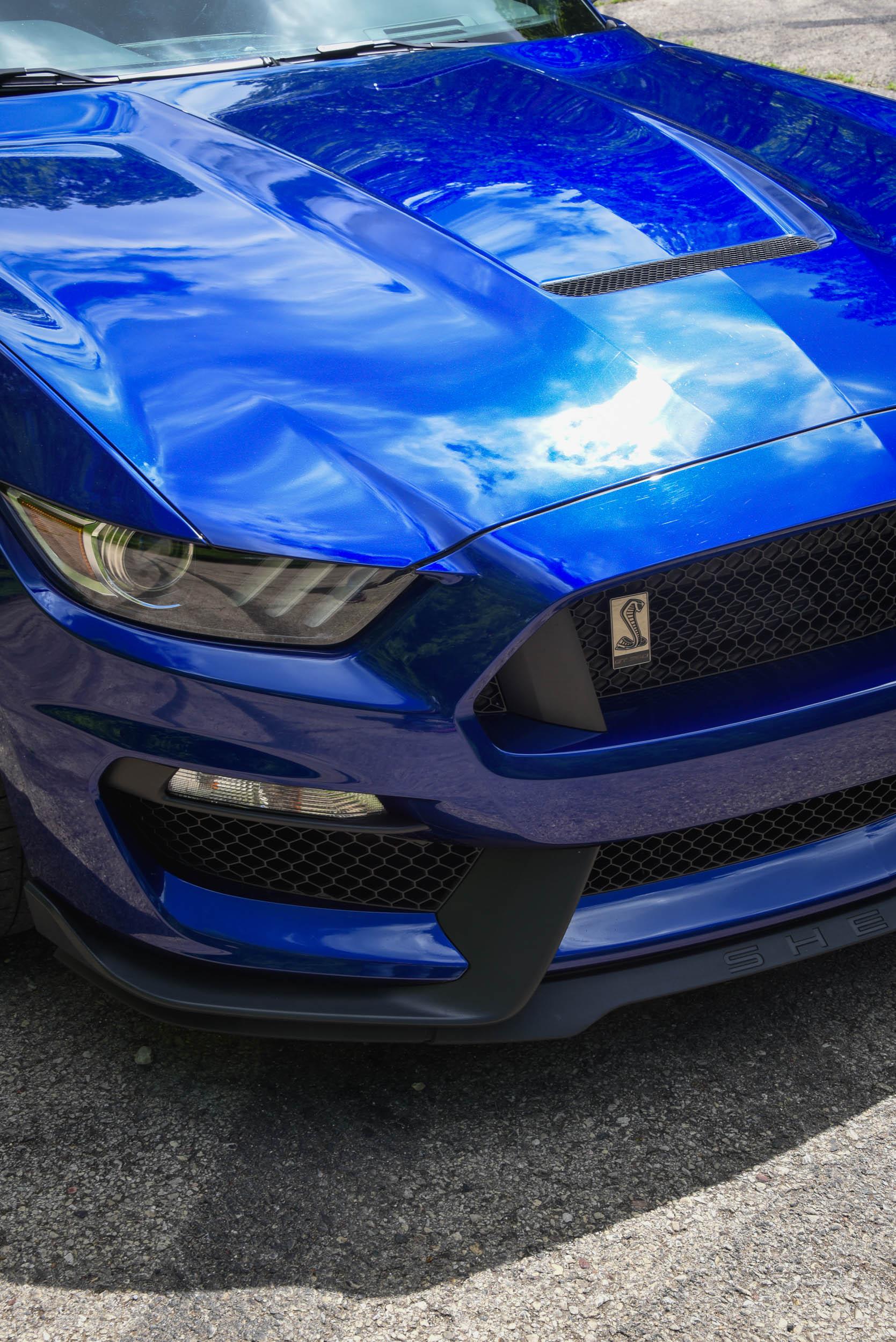 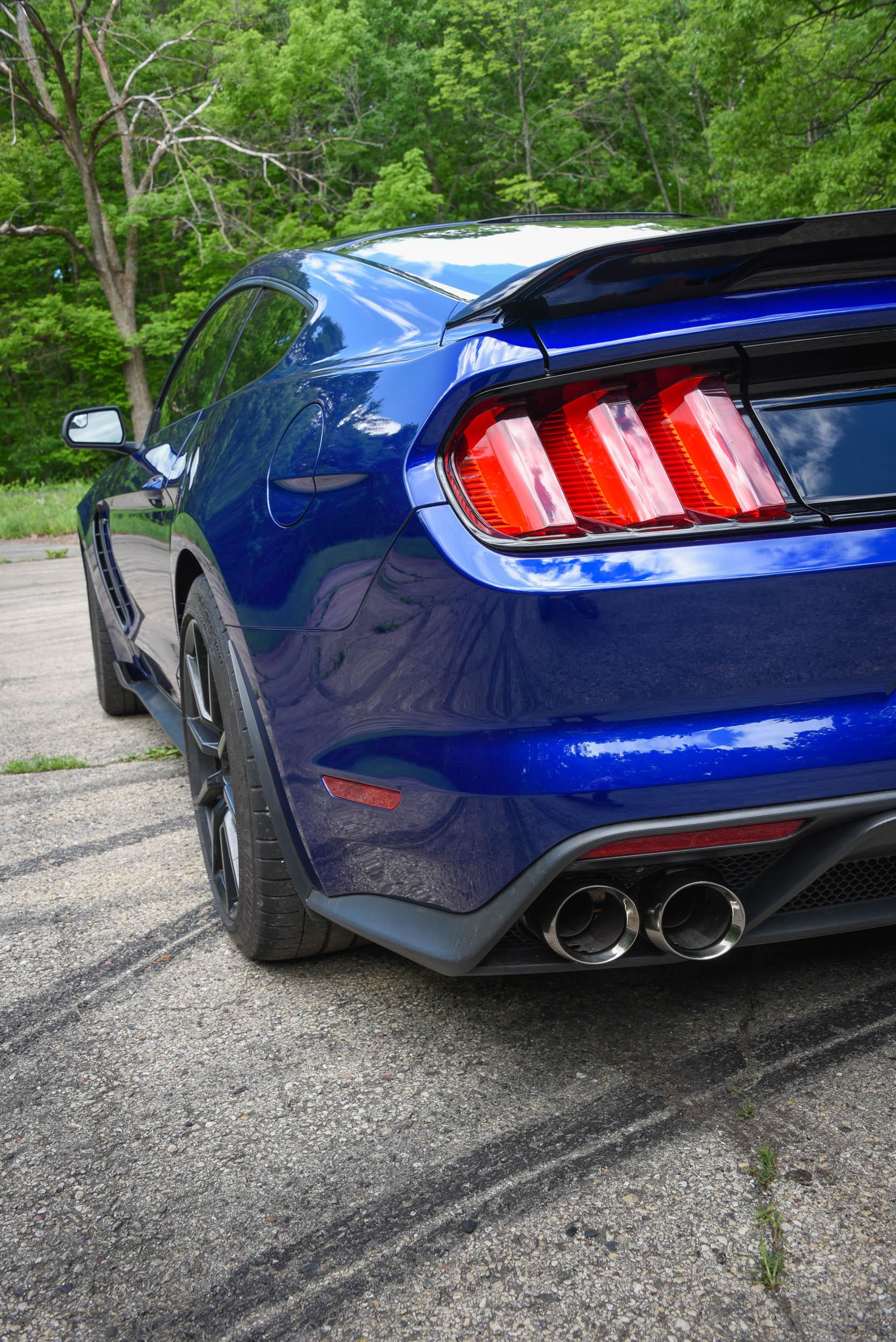 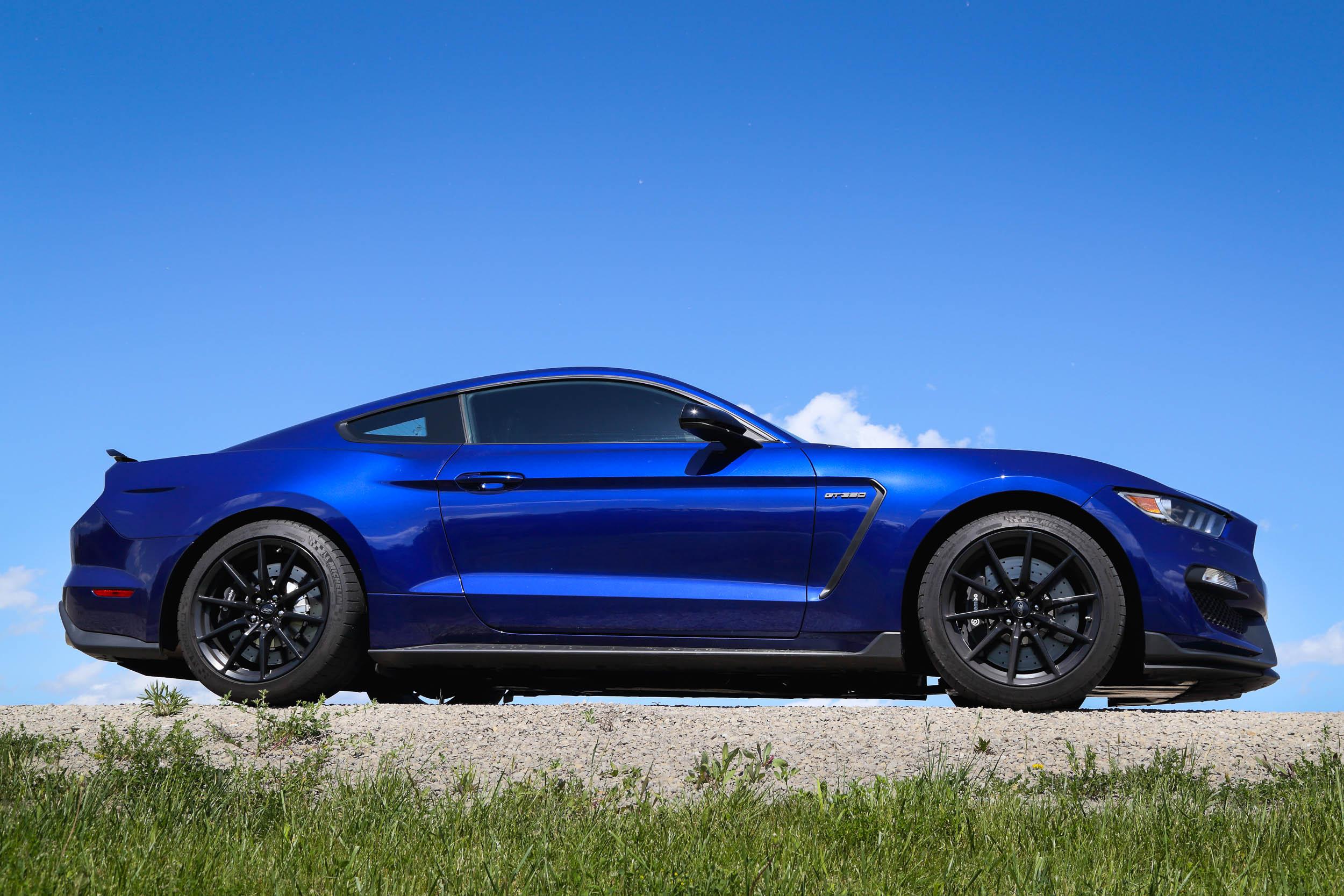