Wolfsburg — Right from the word go, the Golf GTI—now in its eighth generation—was a cult car. Take a walk through the unmistakable visual DNA of the GTI, and how this has developed over the past half century with commentary from Marco Pavone, Head of Exterior Design for the new Golf GTI.

Golf GTI Mk 1
The original GTI hit the scene in Europe in 1976, full of confidence, sporting a front grille with a red border and a simple design. The inside of the black radiator grille on the original GTI features eleven thin horizontal lines. The headlights, protruding from under the hood of the lightweight compact car, form the external end points. The early GTI can be identified by the narrow bumper that was replaced by broader, plastic-covered bumpers in 1978. The first GTI emblem is chrome and intentionally presents a stark contrast with the black Volkswagen logo. “Even with the original GTI, all the design elements already reflect a clear attitude,” says Pavone.

Golf GTI Mk 2
“The design of the second-generation Golf GTI is a fascinating development,” says Pavone. Initially sporting twin headlights, like its predecessor, the 16-valve version of the second-generation GTI came with integrated foglights from 1988—each located next to the headlights. The grille is still outlined in red, while the bumper itself also features a red GTI line. Under this, for the first time, comes an additional air intake. On the whole, the design continues the conceptual course of the first generation: it is larger, wider, and more comfortable. The Volkswagen logo remains black.

Golf GTI Mk 3
The third GTI is somewhat softer and has even more of a wedge shape. “This backs up the sporty character of the Golf GTI,” Pavone explains. The front features a striking modification: the double headlamps of the second-generation GTI disappear under a combined diffuser lens, replaced by a collective diffuser. They give the radiator grille, which now consists of just three thick horizontal bars, a narrower appearance. The front spoiler is finished in the same color as the car, and is once again lowered and broader. This lower area also features a split air intake, which becomes a typical feature of generations 4 through 6. Another new feature is the striking red line below the halogen lighting unit, while the GTI emblem, now in red, is moved closer towards the chrome Volkswagen logo, which is now in chrome.

Golf GTI Mk 4
“Launched in 1998, the Golf 4 GTI has a more modest appearance. For example, it is the first and only GTI not to sport the red stripe on the radiator grille. And yet the model is celebrated to this day as the starting point for a new, clean era of vehicle design. It also set new benchmarks in terms of individuality, quality and speed,” says Pavone. From the designer’s perspective, the European 25th anniversary edition was particularly striking. “It was thanks to that model that I was bitten by the GTI bug,” explains Pavone, who was born in Brazil. “The brilliant clear-glass headlights and wide sills were particularly distinctive!”

However, even in the production GTI, the lighting units (including the turn signals and foglights) were installed in a compact module. The front and rear aprons, side sills and roof-edge spoilers were painted the same color as the car itself, while many elements were once again broader than those of its predecessor. The GTI logo shifted from the right to the left for the first time.

Golf GTI Mk 5
“The design of the fifth-generation GTI is once again far more self-contained and takes inspiration from the first GTI,” says Pavone, describing the development. This is particularly clear from the red trim around the radiator grille. One new and emotional style element is the honeycomb design of the grille: Pavone says, “Even today, it is still hard to imagine a GTI without it!”

The round twin headlights are back, grouped in a unit behind dark glass. Just like its ancestor, the foglights are located low down in the front apron.

Golf GTI Mk 6
The sixth-generation of the Golf GTI transported the tradition of the original version into the future. Two fine red trim lines run across the grille and link the bi-xenon headlamps. The spoiler is now adorned with striking air intakes with three sharp fins on each side. The vertical foglights are also located low. The spoiler takes up the central alignment of its predecessor, but broadens it. A splitter is also installed for the first time. “That gives the Golf 6 GTI the most powerful, modern and angular appearance to date,” explains Pavone.

Golf GTI Mk 7
“This was the first GTI on which I was allowed to let my creative juices flow as a designer,” says Pavone. “For me, it remains the very best, with an iconic quality—no GTI had ever been as stylish.”

The continuous red GTI trim on the seventh generation runs confidently into the slim, full-LED headlights. The hood arches right down to the grille, while sharp lines run from the headlights up to the A pillar. One particularly characteristic element is the daytime running light with its “Wings” design, which also features the red GTI trim. The broader side sills emphasize the fact that this ‘power’ Golf is a dynamic beast. However, the front spoiler, with its typical GTI honeycomb pattern, also impresses with wider bumpers extending further outwards.

Golf GTI Mk 8
The deep-set headlights are enough to set the eighth-generation GTI apart and reinforces that ‘light is the new chrome’. “This Golf GTI has become an icon of the modern era and bears the unmistakable design DNA of its predecessors. However, it embodies these attributes in a more progressive and digital manner than ever before, with a particularly powerful and dynamic stance,” says Pavone. Immediately below the hood, we find the familiar red GTI trim. While the predecessor’s bumper was divided by fins, the honeycomb design is now completely open. Located to the left and right are the new GTI wings, which charismatically integrate the optional LED fog lights in an X shaped and create a completely new impression. 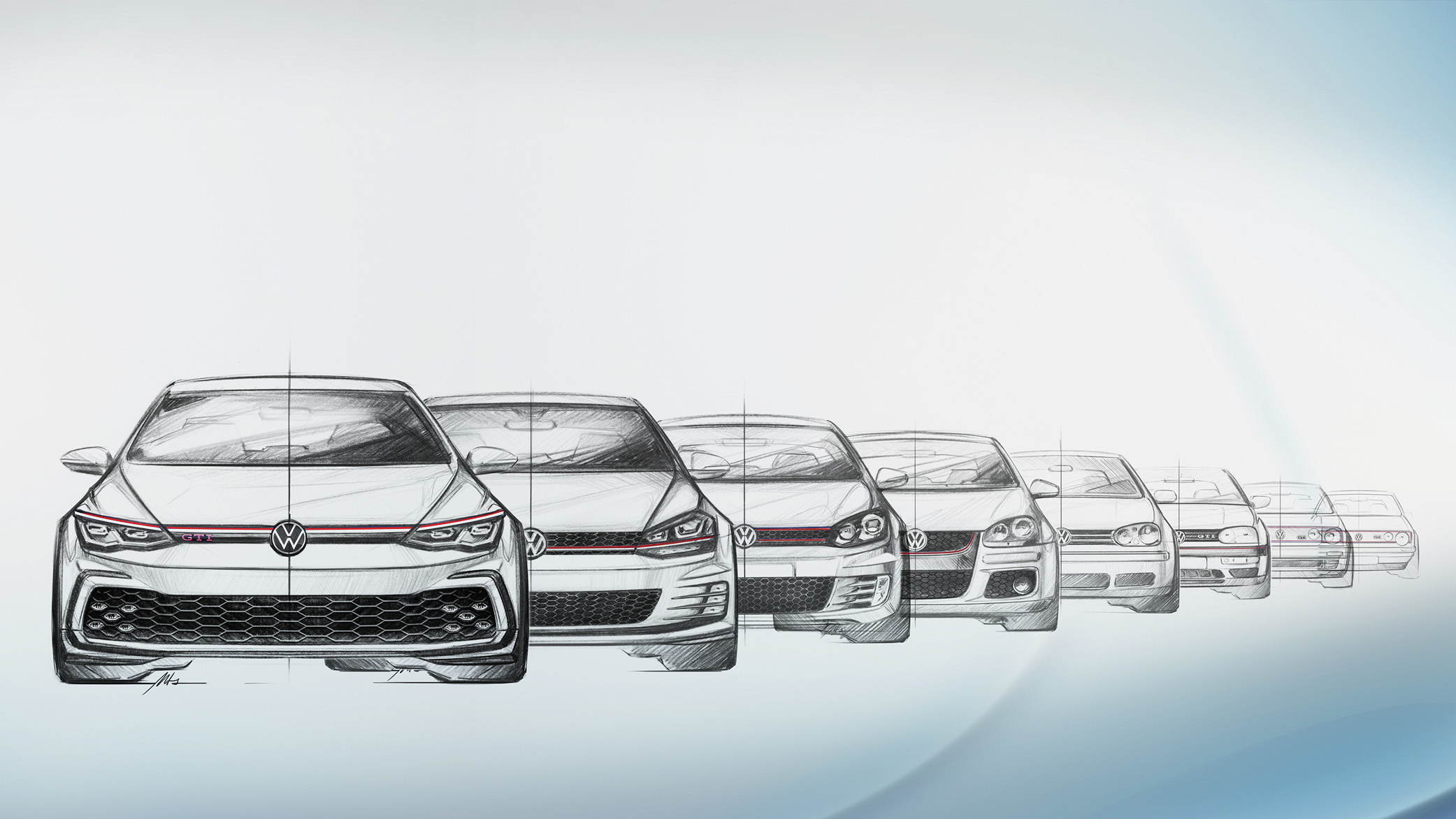